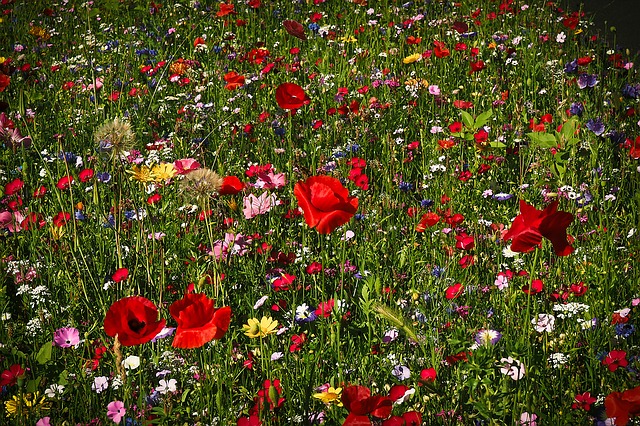 In 2010 governments from around the world met in Aichi, Japan and under the ‘Convention on Biological Diversity’ agreed on 20 biodiversity-related targets to turn around global biodiversity decline by 2020. Although there are many good news stories for individual species and specific areas, a mid-term analysis of progress towards the Aichi targets in 2014 suggests that despite increased policy and management responses to the biodiversity crisis, the impacts of these efforts are unlikely to be reflected in improved trends in the state of biodiversity by 2020.

This matters because biodiversity and ecosystems provide us with our life support systems. Without biodiversity we would not have clear air to breathe, clean water or food on our plates. Biodiversity adds value to the economy and our wellbeing through providing benefits or ecosystem services for industry, agriculture, tourism and leisure as well as having intrinsic value.

We can do more to protect our biodiversity. There is a huge opportunity for developers to enhance biodiversity hand in hand with the provision of infrastructure and development. Protecting biodiversity, economic growth and development are too often seen as conflicting aims. They are not.

Biodiversity Net Gain is a quantitative, stepwise process that is applied to a development and aims for biodiversity to be left in a better state than beforehand. It results in greener, more biodiverse developments that not only offer homes for wildlife but also provide wider benefits for people, such as improved air quality and recreational amenities. This provides clear, quantifiable outcomes for biodiversity with a robust evidence base, which allows clear reporting and benchmarking. It gives developers positive news stories to tell, contributes to local, national and international targets for biodiversity and helps to create great places for people to live and work.

How does it work?
Within the UK, approaches to Biodiversity Net Gain generally uses the Defra’s metric for biodiversity offsetting which is based on habitat distinctiveness, condition and area (or length of linear habitats ). To calculate baseline biodiversity units (i.e. before development), distinctiveness and condition are given numerical ‘scores’, which are multiplied together with hectares or kilometres of habitat:

To calculate the biodiversity units that may be achieved post-development, risk multipliers are introduced to account for difficulty of habitat creation (delivery risk); distance of offset from development (spatial risk); and time for created habitats to reach target condition (temporal risk). Each risk multiplier is assigned a numerical ‘score’ enabling post-development biodiversity units to be calculated as follows:

It’s important to remember that using the metric to obtain a number of biodiversity units is just one piece of the puzzle. This number should be combined with a full ‘biodiversity assessment’ that considers all the other pieces – species composition, habitat structure, ecological functionality and people’s use and cultural values associated with that biodiversity.

Biodiversity Net Gain follows the mitigation hierarchy, a four step tool designed to result in wins for both biodiversity and development.

The four steps are as follows: 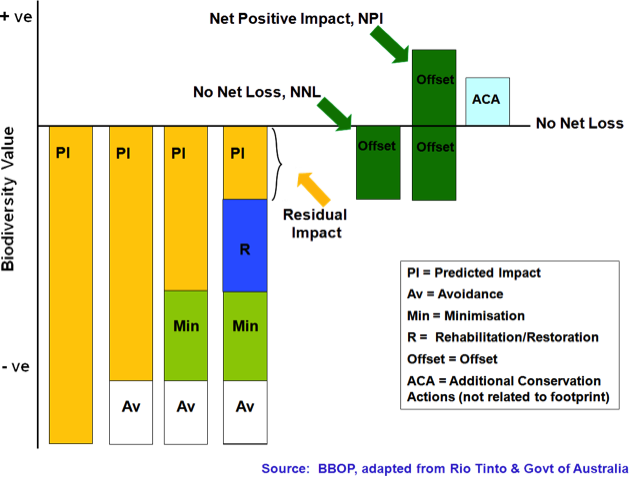 Following the first three steps alone (avoidance, minimisation and onsite rehabilitation/restoration), could be enough to not only reduce the impacts on biodiversity, but could also result in a net gain for biodiversity. However, after these three steps have been carefully considered, a “biodiversity offset” may still be required. Biodiversity offsets are a form of off-site compensation, whereby a habitat which has been disturbed is recreated elsewhere. They are designed to compensate for significant adverse effects to biodiversity and aim to achieve at least no net loss, but preferably a net gain to biodiversity. Using a biodiversity offset is a last resort for any developer and is only considered after all steps of the Mitigation Hierarchy have been applied to a development. The Business and Biodiversity Offsets Programme (BBOP) have a list of international best practice principles to follow if you’re considering this type of approach on your developments.

Laura Homfray works as an Assistant Biodiversity Consultant at WSP and was the lead author of the WSP’s Biodiversity Net Gain White Paper. Laura has worked to deliver Biodiversity Net Gain on a range of large infrastructure projects (mainly road and rail). Prior to moving into consultancy, Laura worked as a Sustainability Assistant in the water sector where her work focused on monetising environmental impacts and piloting Natural Capital approaches. Email: Laura.Homfray@wsp.com