Home » Connecting people with nature: Biomimicry – using a forest as a pathway to a paradigm shift 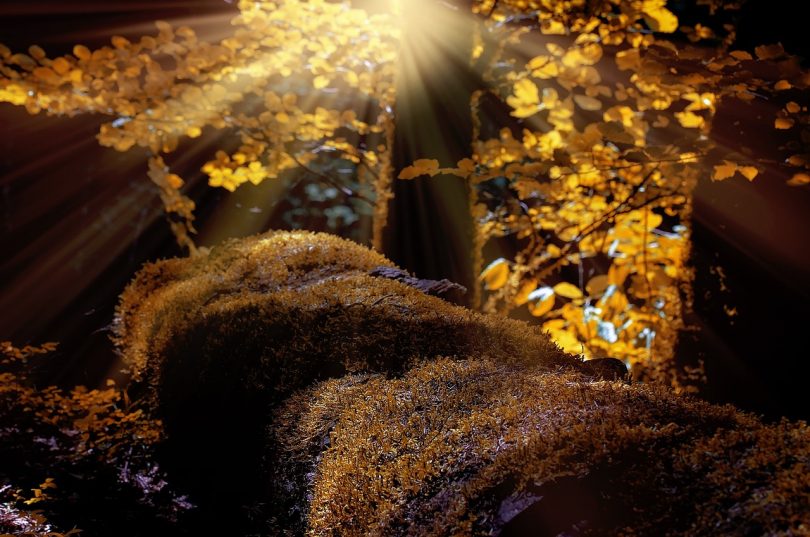 As part of Inside Ecology’s ‘Connecting People with Nature’ series, Jamie Miller takes a closer look at how we can use the natural world to teach us about a more sustainable, holistic way of doing things…

I recently read “The Hidden Life of Trees” by Peter Wohlleben, which offers a unique interpretation of forest behaviour. Wohlleben uses terms like friendship, language, love, etiquette, aging, climate control, burnout and immigration to describe a forest. He also described the ways that trees would create forms, processes and behaviours to engineer their habitat – much like humans do. In this, he bridged the human world with the natural world in a very biomimetic way, opening the possibility that a forest could teach us about building better societies and cities.

Biomimicry
Biomimicry is a rapidly emerging idea that draws on nature to inspire innovation. For example, it’s copying the hooking mechanism of a burdock burr to create Velcro, or emulating humpback whale fins to create a wind turbine blade that is 20% more efficient, runs at slower wind speeds and is quieter than traditional blades. The core idea of biomimicry is that for billions of years, the natural world has refined solutions for how to survive on this planet and that if we quiet our cleverness, we may tap into these ideas to solve complex problems. Although biomimicry is not a new idea – think of snowshoes inspired by arctic hare feet – it comes at an opportune time, when we need strategic design ideas that can transform our rooted systems towards greater sustainability and harmony with nature. 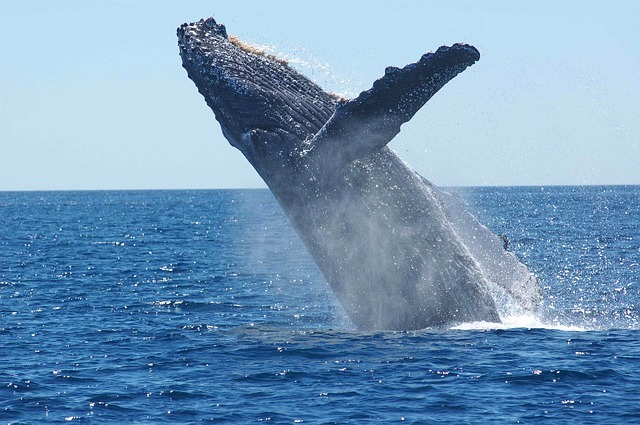 The fin of a humpback whale has influenced the design of more efficient wind turbine blades.

Our complex, “wicked” problem
The root of our current problem is in the way that we have evolved. Throughout our history, we developed clever ways to diverge from our natural environments. For example, we learned to harness stored energy (i.e. wood, coal and oil) to create systems that are robust, static, and that are designed to control and resist the natural flows of our environment. We learned to design ourselves out of nature.

The problem, however, is that when a system is not in tune with its environment, it becomes more energy intensive to maintain and at risk of potential collapse. This is true of any system – e.g. forests, cities, businesses, or political parties – where the dynamic environment will push a system out of equilibrium, and to maintain consistency and predictability, the system will require energy inputs to push back. It is similar to the way in which we use energy to resist floods when we build in floodplains.

Conversely, nature builds with the flows of its environment and is intuitively aware of change. For example, a forest harnesses local resources and builds within limits. At multiple scales, it uses information rather than materials to create forms and processes that are highly attuned to its place. It uses benign manufacturing, at body temperature and pressure, to develop products that are fully recyclable and that contribute back into the circular economy. In a forest, every species is working towards its own niche, innovating from the bottom-up towards greater diversity, and through that diversity, greater resilience. 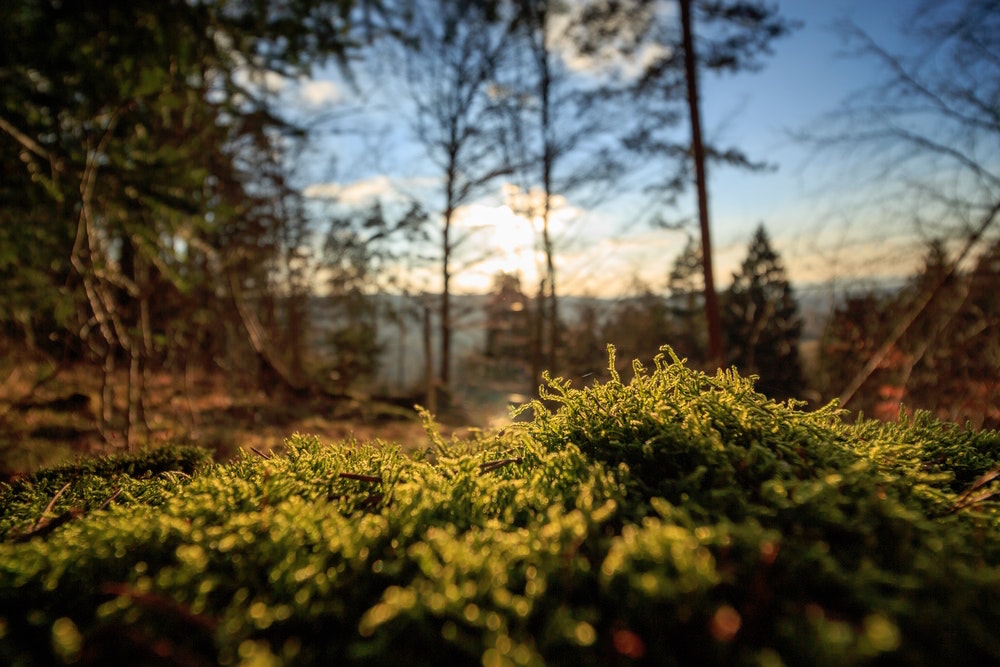 In terms of biomimicry, we could learn from the processes in nature. The examples of Velcro and a whale-inspired turbine blade are two examples of emulating nature’s forms. There are many examples of form-based biomimicry, which are often the easiest way to communicate the concept because people can visually see the emulation. But biomimicry is also about emulating the way nature does things, and beyond that, nature’s systems. And it is at this systems-level that biomimicry may have its greatest potential.

Evolving complex systems: systems-based biomimicry
Our engineered environments are well-established, which means that they are also hard to change. By drawing on systems-based biomimicry we can see that nature has devised clever systematic strategies for transforming complex systems. This includes its adaptive capacity, which in ecology can be described by an “adaptive cycle” and could be used to transform our rooted and outdated systems.

The adaptive cycle is an ecological model that is made up of four general stages: exploitation, conservation, release and reorganisation. It describes the way an ecosystem will rapidly exploit resources and gradients to create a complex system, which tends towards conservation. At multiple scales, this complex system will “release” (e.g. leaves falling or trees dying) to allow the stored nutrients to go back into the soil for other, perhaps more appropriate species, to emerge. 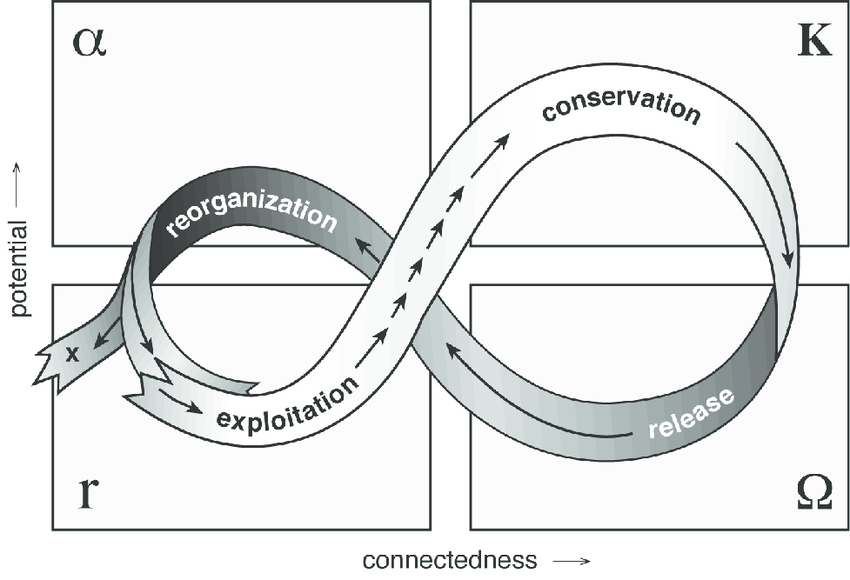 All systems inevitably release at multiple levels and the resilience of an ecosystem depends on how many levels of release take place. For example, a tree that can adapt its roots, bark, branching structure, leaves, and connections to other species will allow multiple, small-scale revolts to occur simultaneously, which will reduce the potential for large-scale transformation or collapse. This means that the system can adjust more subtly to large environmental perturbations.

Through biomimicry, we can use the adaptive cycle as a metaphor for safely transforming our established systems through bottom-up, small-scale “revolts”. This includes inspiring individuals to creatively reframe our built environments through the lens of biomimicry – e.g. inspiring walls that could breathe like skin, buildings that could self-heal, small-scale and local fabrication of complex materials, or creating communities that generate no wastes in a circular economy. With emerging technologies like 3D/4D printing, big data, nanotechnology and green chemistry, these ideas are increasingly becoming more realistic as we’re beginning to see incredible advancements of what is possible. In Canada, one of our goals is to leverage this potential and inspire biomimicry-based disruptions through the Biomimicry Commons.

The Biomimicry Commons is an incubator and disrupter space that is fuelled by the creativity of the commons and by the philosophy of biomimicry. It’s an attempt fill a niche for innovative thinkers to access their creative potential, to transform their design lens, and to think, behave, and create from a paradigm that’s inspired by nature. We see it as a seed towards a new ecological-based paradigm that is based on restorative, regenerative, sustainable and harmonious designs, inspired by nature.

About the Author:  Jamie Miller is the founder of Biomimicry Frontiers and the Biomimicry Commons. Frontiers is a consultancy that applies biomimicry thinking, principles and technologies into the built environment. It’s an evolution of Jamie’s PhD research in engineering, which focused on a systems-level application of biomimicry to improve urban infrastructure resilience. The Commons is Canada’s biomimicry innovation hub. It links entrepreneurs with leading academic and industry partners to create jobs inspired by nature. In all he does, Jamie focuses on transforming our lens of design and co-creating systems in harmony with nature.