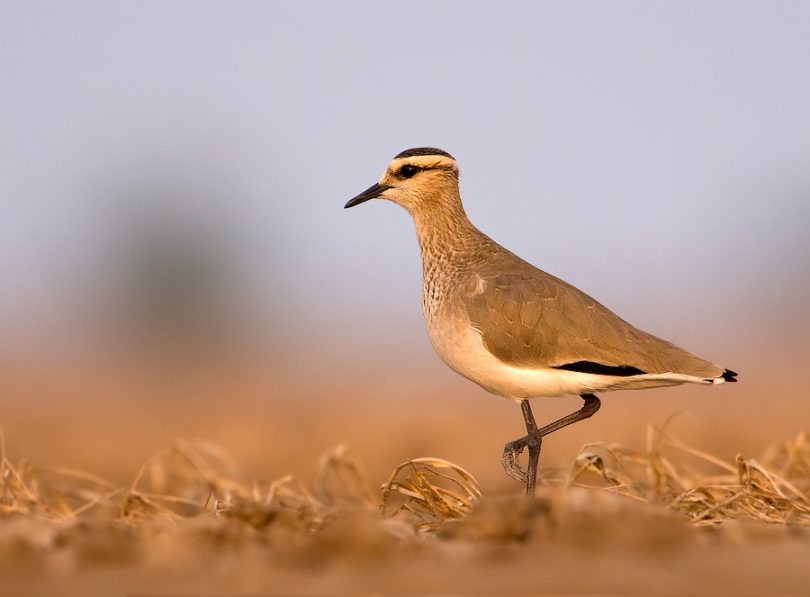 The Sociable Lapwing is critically endangered; in this article, Rob Sheldon (RDS Conservation) takes a look at the vital information that is being provided by one remarkable bird…

Satellite tracking of individual birds is a scientific tool that can lead to a greater understanding of populations that in turn result in targeted conservation actions. The RSPB and ACBK have been tagging and studying Critically Endangered Sociable Lapwings since 2007 and a huge amount has been learned about their general migration routes. One route goes west around the Caspian Sea before heading south through the Caucasus region and into Turkey, Syria, Iraq and then onto Saudi Arabia and Sudan. A more easterly route heads down through Uzbekistan, Turkmenistan before ending in Pakistan and north-west India.

In the last few years one individual bird, tag number 142944, but more affectionately known as Maysa (Arabic for ‘graceful’), has undertaken several migration cycles and provided conservationists with a wealth of hugely important information. Maysa is an adult female Sociable Lapwing tagged on 2nd June 2015, near Abay, in central Kazakhstan. Her tag is still transmitting good quality location data as of November 2017.

On her first migration (with a satellite tag) in the autumn of 2015 she stopped at Tallymerjen on the Uzbekistan/Turkmenistan border. Survey teams working on both sides of the border estimated between 6000-8000 Sociable Lapwings were using the area, making it the most important stop-over site on the eastern flyway, and rivalling Ceylanpinar in Turkey as the most critical Sociable Lapwing staging site overall. Interestingly location data from Maysa and another satellite tagged bird Tesfaye show that the birds stay here for up to a month, further highlighting the importance of this area as a refuelling and resting place.

Maysa (and Tesfaye) then proceeded to fly further south and she spent the winter of 2015/16 in Pakistan. A local survey team was able to locate 200 Sociable Lapwings wintering in Sindh and Baluchistan. Although it was suspected that birds wintered in Pakistan this new information confirmed that the country is a key wintering range state. By April 2016, Maysa was back on the breeding grounds having undertaken one complete migration cycle.

In September 2016, Maysa’s amazing journey started all over again following the same pattern as the previous year, again stopping off at the important site at Tallymerjen before moving on to spend the winter of 2016/17 in Pakistan. Crucial funding from the Mohammed bin Zayed Species Conservation Fund enabled additional surveys and community work to be undertaken in Pakistan. Several surveys were undertaken in the areas where birds had been recorded previously, Sindh and Baluchistan. Again using the locations of Maysa (and Tesfaye), survey teams were able to focus their search on specific areas. On the 24th December 2016 a record 365 Sociable Lapwings were counted in Dadu, Sindh, the largest flock ever recorded in Pakistan. The satellite tagged bird Tesfaye was also sighted in agricultural fields in Dadu on the 3rd March 2017. A full update and report can be found here and here.

Maysa has continued to provide data throughout 2017 and again returned safely to the breeding grounds in Kazakhstan, completing a second full migration cycle. And in the last few weeks we know that Maysa is yet again back in Pakistan for at least the 3rd successive winter. Her current locations are in the same general area of Sindh as in previous years.

A team from the Saiban Development Foundation are leading the field surveys and community work in Pakistan, and one of their key findings in the last two winter periods has been the likelihood that hunting is a key threat to the species. The team are hopeful that community engagement and education could limit any impact of hunting. Worrying new information has recently emerged in the local Pakistan media regarding the issue of hunting in the Badin area of Sindh. This area is only a few hundred kilometres from our Sociable Lapwing population

We are hopeful that we can get a survey team in the field in the coming weeks to try and locate Maysa and any other Sociable Lapwings that may be present. Additional urgent work is required to assess the scale and extent of hunting and illegal killing and how this may impact on the Critically Endangered Sociable Lapwing.

About the Author: Rob Sheldon has worked in nature conservation for almost 20 years, including 12 years with the Royal Society for the Protection of Birds (RSPB). Since 2013, he has been the Chairman of the Ornithological Society of the Middle East, The Caucasus and Central Asia (OSME). Most recently he has worked for the Zoological Society of London (ZSL) as the Director of the King Khalid Wildlife Research Centre (KKWRC) in Saudi Arabia. He now works freelance as a consultant through RDS Conservation. For further information on what services RDS Conservation can offer, please follow this link.