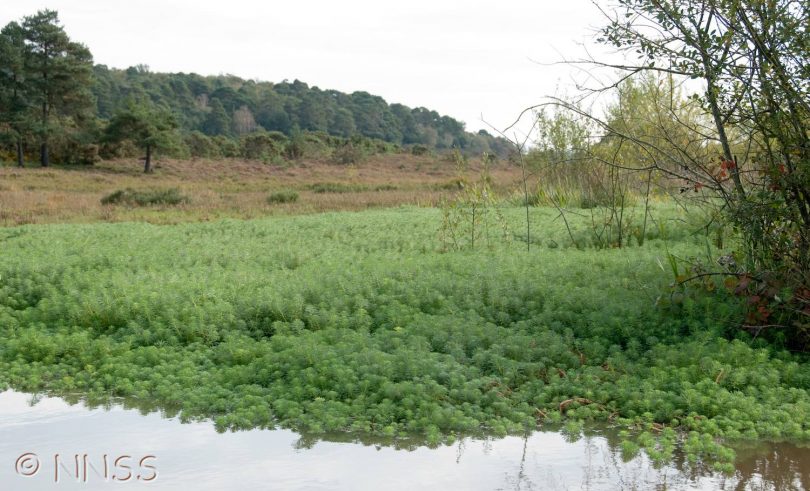 This week as part of our invasive non-native species series, Elizabeth Kimber focuses on parrot’s feather…

Parrot’s feather (Myriophyllum aquaticum) is a distinctive perennial aquatic plant with a feather like structure, native to south and central America.  The plant was first brought to the UK in the 1870s as an aquatic plant to aerate garden ponds. After being discarded, it found its’ way into the wild; it was first recorded in the UK associated with a pond at Lingfield in Surrey in 1960. 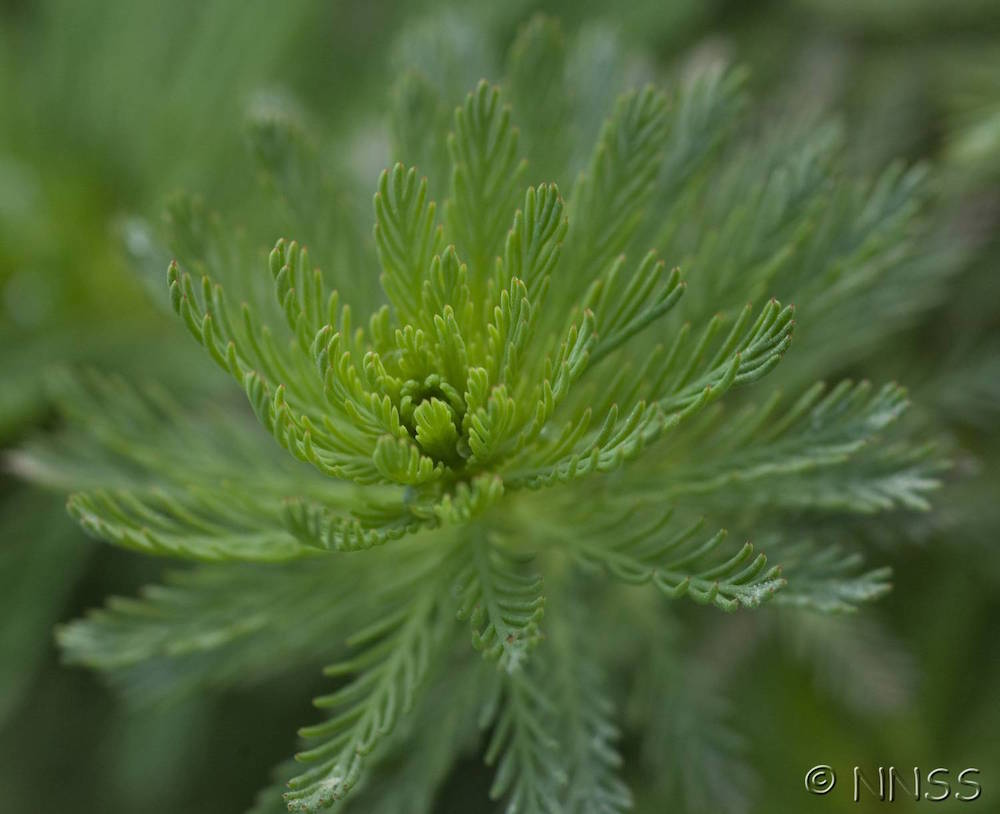 Identification & Ecology
Identification features of parrot’s feather include leaves that are blue-green and arranged along the stem in whorls of 4-6. Each individual leaf is like a small feather in appearance, with a green through grey stem near the base. From May to August flowers form at the base of the leaves, however, these are small so difficult to see.

Parrot’s feather will grow in any still water habitat, including ponds, lakes, canals and reservoirs, though it is occasionally found in slowly moving water. The water quality where parrot’s feather is usually recorded tends to be nutrient rich.

Parrot’s feather is an emergent plant, which can be seen above the surface of the water as well as below it during the growing season. In winter the plant will die back and is only found in its submerged form.  It is locally abundant in southern England. 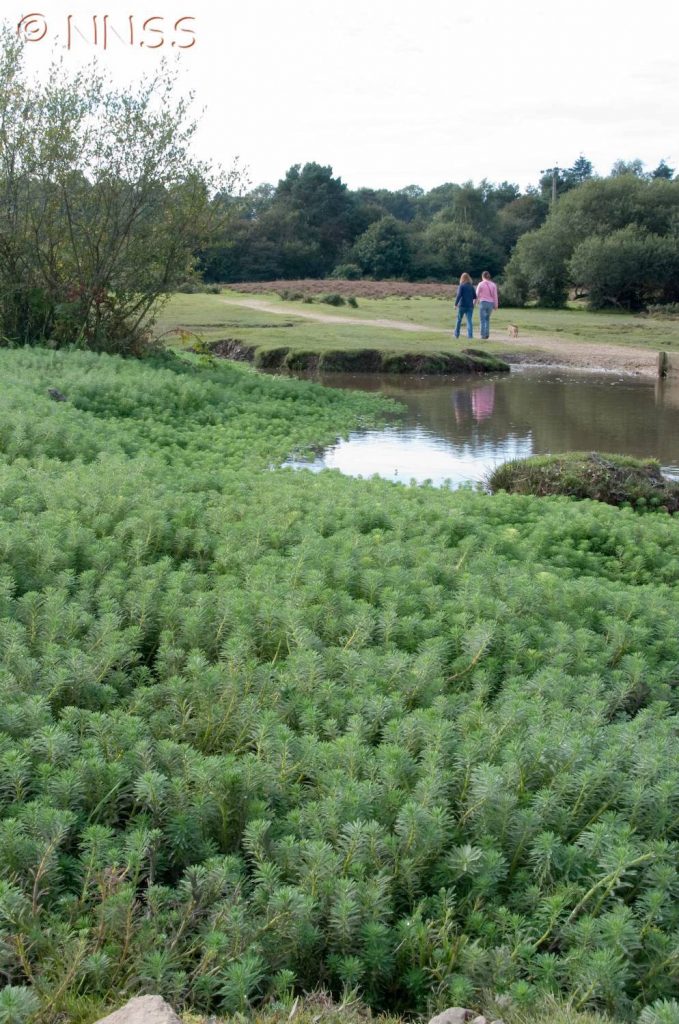 Impact
Parrot’s feather spreads via fragmentation and is capable of forming dense infestations in suitable habitat, occupying the water column in water. The primary impact of the parrot’s feather is shading out other aquatic plants, it can also damage the invertebrate communities associated with these.

Dense growth of parrot’s feather can cause flooding and ponding of water, leading to increased health hazards, although these are not likely to be a serious problem in the UK.

Parrot’s feather could be considered a threat to tourism, angling, boating and other recreational pursuits, and hydro-electric power stations, which would result in an economic impact. 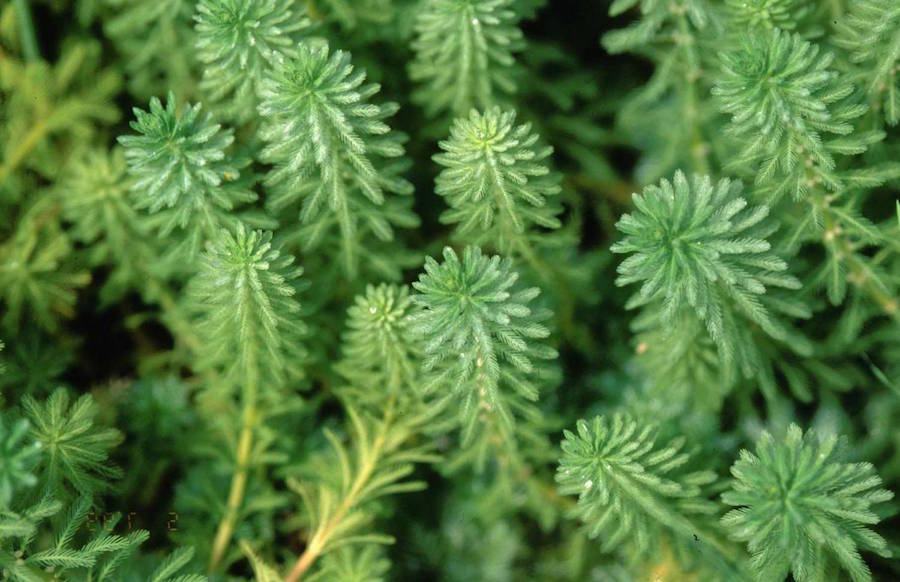 Control Measures
Improving water quality of areas with/near infestations of parrot’s feather, by reducing the nutrient load and increasing shade, can reduce prevalence and impact of this species in the longer term.

Physical control is challenging as it reproduced by fragmentation, whereby fragments float downstream and colonise new areas. Hand pulling may be effective for small infestations however.

Chemical control can be used, and is most effective, however, this can kill native species; chemical control in water must also be agreed with the Environment Agency.

Natural control of parrot’s feather through insects such as Lysanthia flavipes and Listronotus marginicollis are known to damage the plant in its native range and have had some success in South America. Practical values of these species as control measures has not yet be quantified, therefore further research may be required.