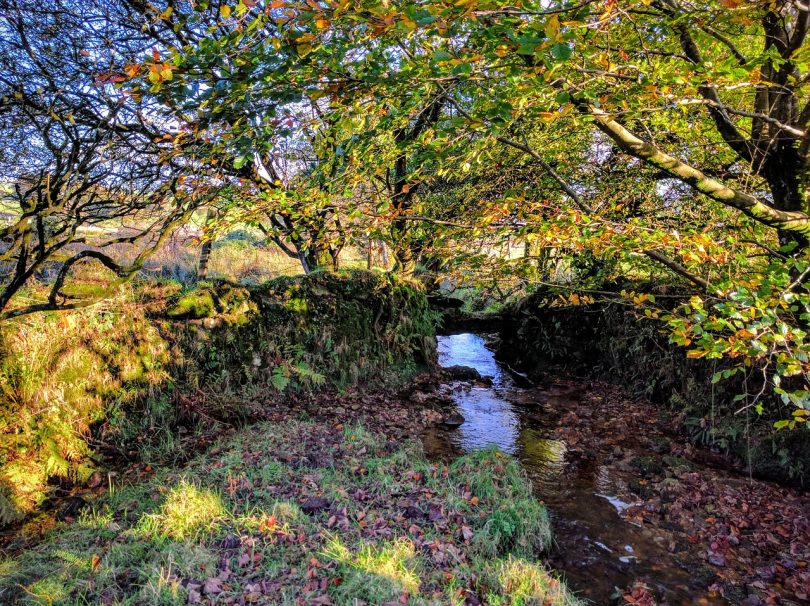 In this enlightening article, Dr. Peter Walker (Principal Aquatic Consultant, RSK), focuses on white-clawed crayfish; looking at the current threats to its’ survival in the UK and the possible solutions to maintaining populations of this over-looked species…

I have long had an interest in crustaceans: my PhD was on crustacean parasites; I have published papers and presented at conferences on crustaceans; and, for several years, I was an advisory editor for the scientific journal Crustaceana. In recent years, I have developed something of a fascination with crayfish, particularly the plight of the UK’s native white-clawed crayfish (Austropotamobius pallipes). 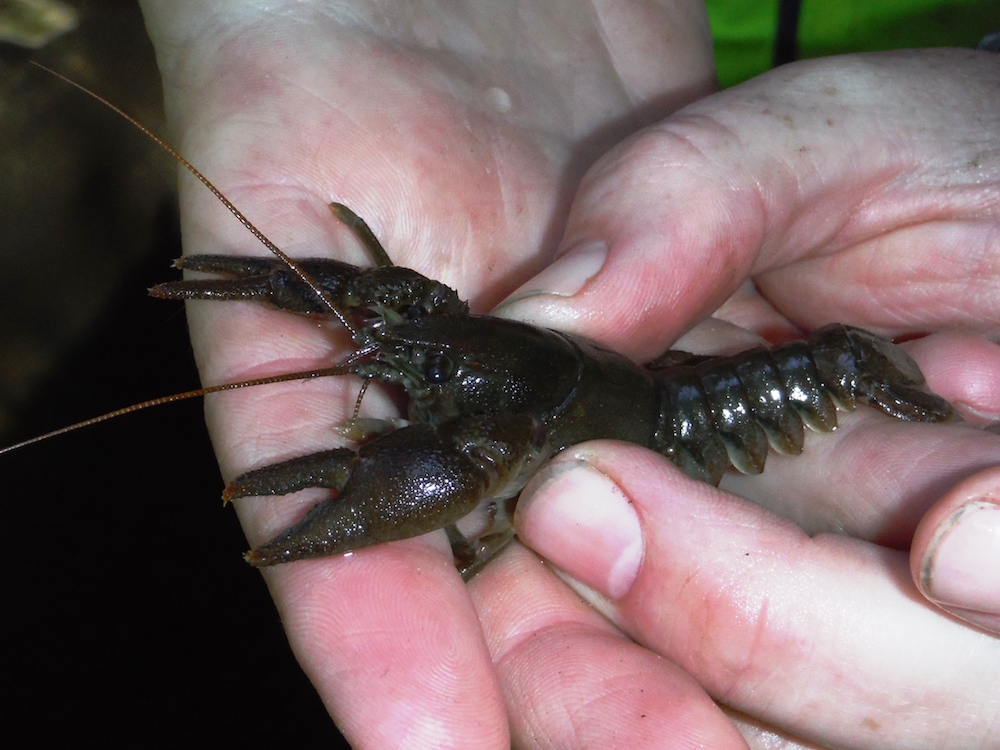 Many of us have seen crayfish in UK rivers and quite a few of us may have eaten them too. For most of us, our only interaction with crayfish will have been with non-native species, most probably the signal crayfish (Pacifastacus leniusculus). However, few of us will have ever have had the chance to see our native white-clawed crayfish, which is typically much smaller and, in my personal opinion, somewhat ‘softer’ or ‘cuddlier’ looking than its highly aggressive American counterpart. 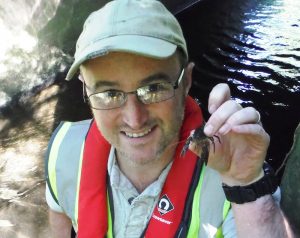 The white-clawed crayfish is the only species of freshwater crayfish considered native to the UK. Historically, there is some debate as to whether the species was, in fact, introduced to the UK as a food source or delicacy [1].  Notwithstanding this, it seems that, based on medieval recipes among other evidence, the white-clawed crayfish has been present for many centuries and certainly before 1500 AD. This last point is important in that it has enabled the species to be included in the IUCN’s Red Data Book, as it is considered as indigenous to the UK [1].

White-clawed crayfish are found in different types of freshwater habitats, including small streams, larger rivers, canals, natural and quarry lakes, and reservoirs. They typically choose habitats with an abundance of suitable refuges such as cobbles, boulders, tree roots, undercut banks and macrophytes. Different-sized refuges are necessary for individuals of differing sizes and ages. Mostly, they are found in relatively shallow water, i.e., less than 1.5 m deep, and usually much shallower. Occasionally, crayfish will create burrows, particularly during the colder winter months, although not to the same extent as non-native crayfish species do. 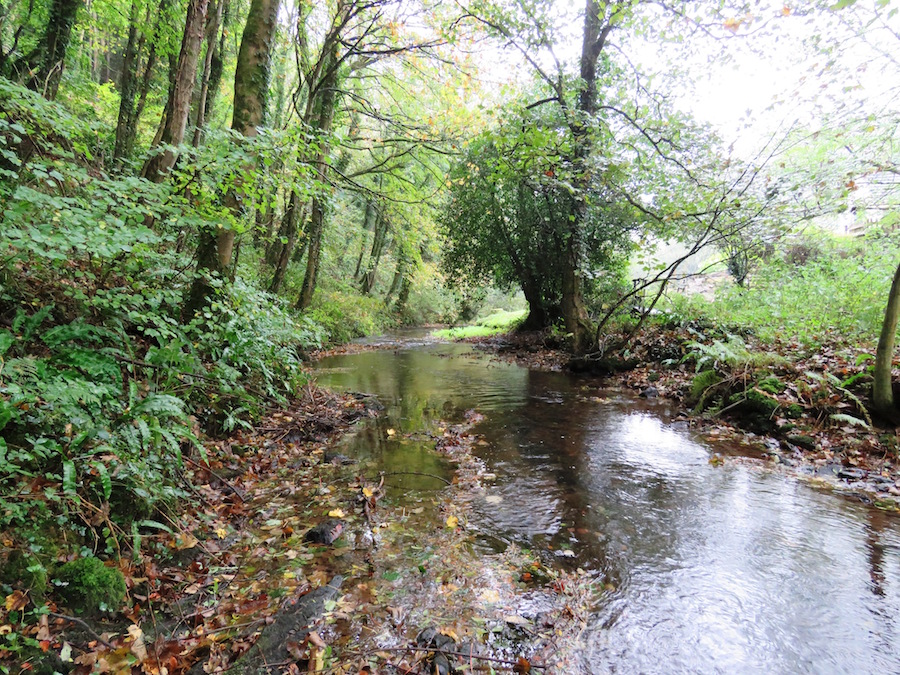 White-clawed crayfish are omnivorous and will eat, essentially, anything that they can clasp with their large (relative to their overall body size) claws. Typically, this includes detritus, macrophytes, algae, dead animals found in the water, for example, fish, and, occasionally, live prey such as other macroinvertebrates and very rarely small fish. They usually only come out to forage for food during the hours of darkness, so this, combined with their cryptic habitat preferences, is one reason why so few people have seen them.

Although the species is found throughout Europe, it is estimated than almost a quarter of the total population lives in the UK. Consequently, and in accordance with various legislation, the UK has an obligation to try to protect and conserve the species wherever it occurs.

Because of the high risk to extant populations, all sites are considered important for the long-term survival of the species wherever it is known to occur. 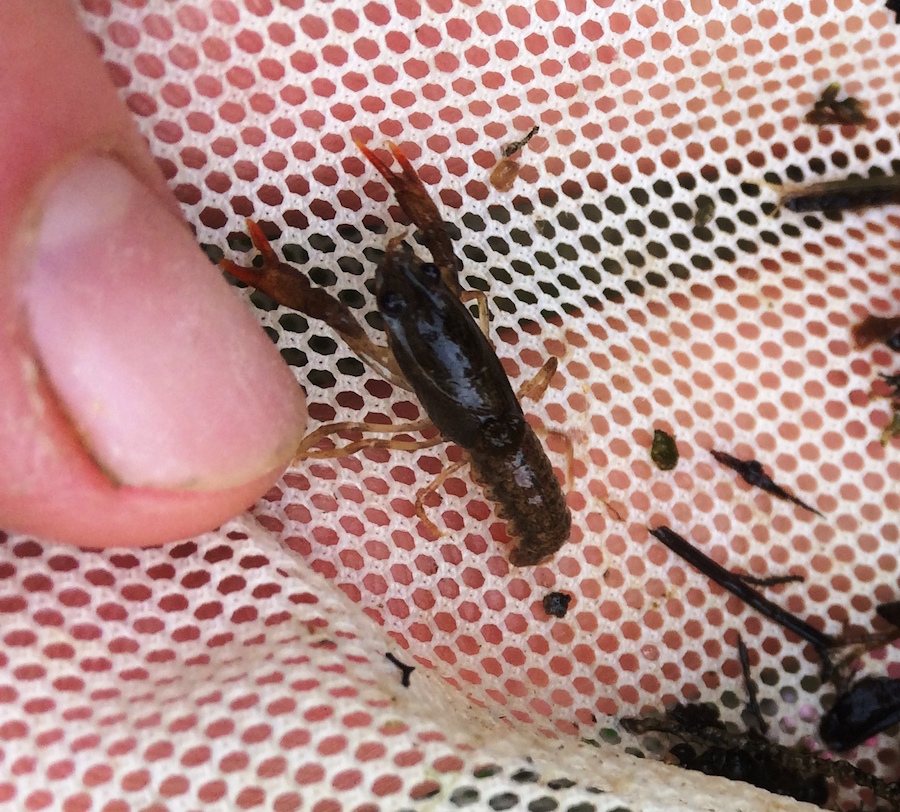 Why is the species so at risk? There are many reasons, some of which I have tried to summarise below: 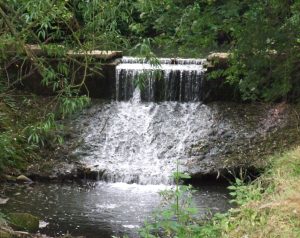 Habitat degradation
Many of the waterbodies throughout the UK have been modified and changed by human activities. This includes creating weirs and sluices for managing water levels, and providing power to water wheels and hydropower schemes, in addition to straightening and dredging of channels for flood defence or irrigation purposes. In some places, this historic alteration of waterbodies has stopped and is even being reversed through river restoration schemes. However, much of this work is funded by grants to charities such as rivers trusts, so the improvements are typically patchy and not always strategically planned and delivered. There remains the overwhelming task of attempting to restore some of the original ecological features to many of our waterbodies.

Water quality
In addition to physical alterations to our waterbodies, we are also responsible for physicochemical alterations. Cooling water discharges, discharges from wastewater treatment works and historical industrial pollution have all played a hugely significant role in adversely affecting the water in our rivers and lakes. Although some measures have addressed these, and indeed industrial pollution has almost ceased in many places in the UK, there are still ongoing issues. Discharges from wastewater treatment works must be monitored for certain chemicals, but many of the compounds in household cleaning products, for example, have no monitoring requirement and their impact on the environment is, therefore, largely unknown.

Diffuse pollution in the form of runoff from agricultural land and our extensive, and ever-expanding, road and rail networks also has a huge role to play in terms of the water quality of our waterbodies. In addition to the chemical polluting components, agricultural runoff contains silt that can smother habitats, which results in reduced refuge and food availability for crayfish.

Abstraction
Many of our waterbodies are heavily abstracted for drinking water, farmland irrigation or industrial purposes, for example, for power station cooling water. Over-abstraction and natural, extended periods of drought, can all heavily affect crayfish populations by reducing habitat availability and increasing the frequency of lower water quality.

Predators
White-clawed crayfish have several possible natural predators, including otter (Lutra lutra), mink (Mustela vison), birds such as heron (Ardea cinerea) and even large fish such as trout (Salmo trutta) and chub (Squalius cephalus). Predation is not generally considered an issue for white-clawed crayfish populations in healthy rivers and where densities are at ‘normal’ levels. However, where populations are struggling, there is a possibility that predation may exacerbate the impacts of other issues. It is unlikely that predator control would have a significant positive impact on white-clawed crayfish numbers, however, so conservation efforts should focus on the other issues as a priority. 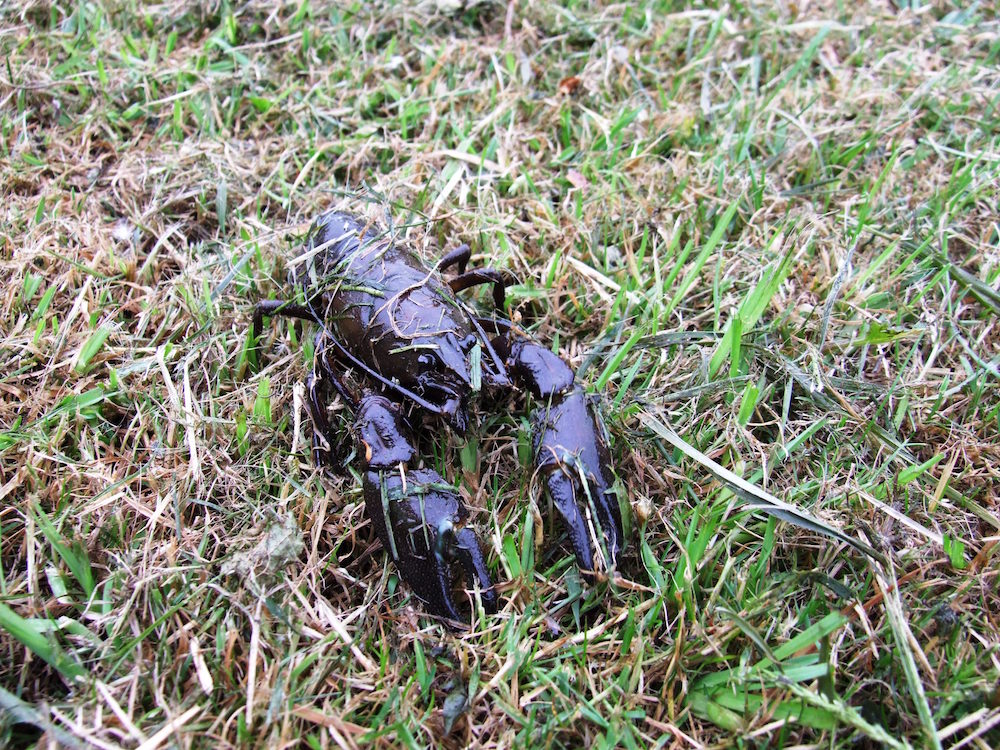 Invasive non-native crayfish
I have saved this one for last, as it is probably one of the biggest threats and arguably, the hardest one for us to do anything about. Once again, people are to blame. In fact, our own government backed crayfish farming back in the 1970s, which resulted in non-native crayfish being deliberately or accidentally, for example, through escapes from crayfish farms, introduced to many watercourses. Various invasive non-native crayfish species have been recorded in the UK, including spiny cheek (Oronectes limosus), virile (Oronectes virilise), marbled (Procambarus spp.), noble (Astacus astacus), Turkish (Astacus leptodactylus) and red swamp (Procambarus clarkia).

However, by far the most prolific invasive non-native crayfish in the UK is the signal crayfish. This species is much-larger, faster-growing and more-aggressive than the white-clawed crayfish. This means that it can outcompete (or even predate on) our native crayfish wherever they co-occur, which results in their complete displacement in most cases. Furthermore, signal crayfish are carriers of a fungal pathogen (Aphanomyces astaci) known as crayfish plague that is lethal to our native crayfish, as they have no natural immunity to it.

What can we do to help our native white-clawed crayfish?
Many of the actions that will benefit white-clawed crayfish will also benefit many other aquatic species. Habitat restoration efforts have increased in recent decades but are still inconsistent in terms of frequency and distribution, largely due to the patchiness of funding. They also frequently focus on other species such as fish without necessarily considering crayfish in any depth. Where white-clawed crayfish do occur, there should be a greater impetus to ensure that any habitat improvements fully consider this species.

Ongoing efforts to improve water quality need to continue and be ramped up where possible. Discharges from wastewater treatment works should be investigated to see what unmonitored chemicals are currently being discharged and to ascertain what effects such substances might have on aquatic life. Furthermore, many such treatment sites cannot cope with increasing levels of waste water from growing human populations or with heavy rainfall events, so they should be upgraded to take into account future human population increases and the potential for more-frequent high-rainfall events linked to global climate change.

Diffuse pollution from our roads and agricultural fields should be considered wholly unacceptable and there is the urgent need to ensure that levels are reduced significantly, not just for crayfish but also for aquatic ecology generally. Options exist to manage this pollution and, in many cases, may even offer economic benefits to farmers, for example, by reducing topsoil loss and the need for the extensive application of fertilisers.

Abstraction is a tricky one. Increasing numbers of people and the associated industries require more and more fresh water, and this has to come from somewhere unless we can halt human population growth, which seems rather unlikely for the foreseeable future! Many of our rivers, lakes and reservoirs are already over-abstracted, so there is an urgent need for alternatives but most proposed solutions are very expensive and often controversial, for example, the construction of new reservoirs that may affect people, property and wildlife. This notwithstanding, it is important that solutions are found sooner rather than later. 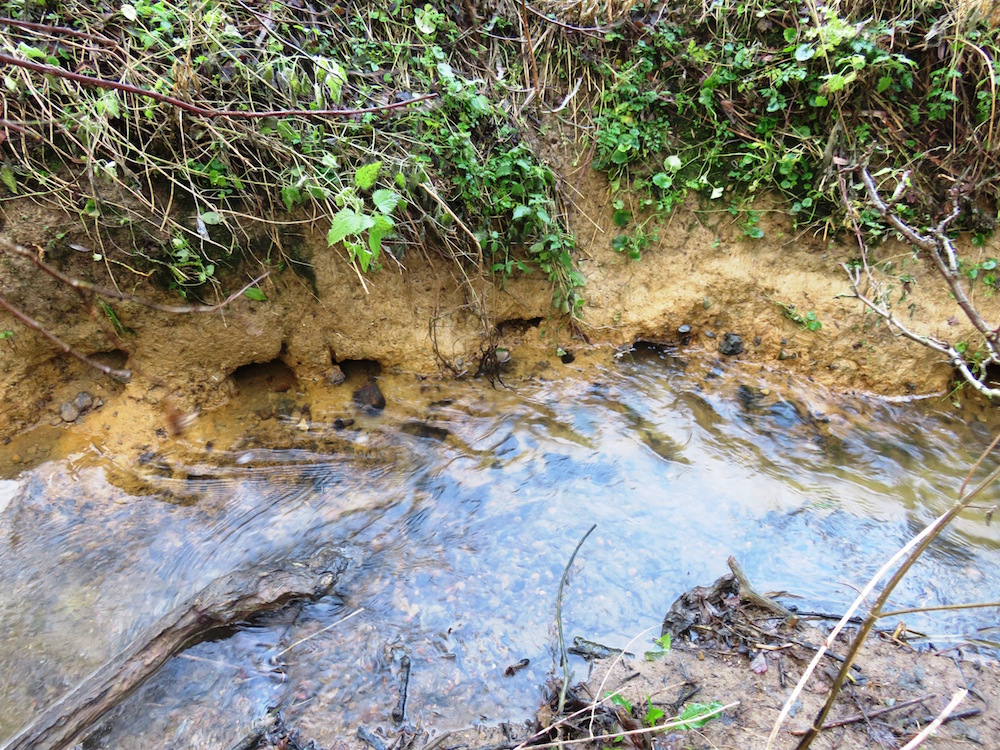 The subject of invasive non-native crayfish is often debated among ecologists, academic researchers, anglers and the general public. “Why can’t we just pay someone to trap them all?” is a question often raised. The problem is that most trapping methods and gear are size selective and may remove good numbers of larger individual crayfish if trapping is intensive enough but tend not to trap the smaller individuals. Signal crayfish are cannibalistic, so removing larger individuals from a population could result in a rapid increase in overall numbers because of the loss of one population control factor. Chemical and biological control measures have been widely considered and are still the focus of some research, but they tend to come with too many problems for other wildlife, so are unlikely to offer anything positive in the foreseeable future.

Currently, the only feasible option for our remaining white-clawed crayfish populations is to safeguard surviving populations and, if possible, establish new ‘ark’ sites. Ark sites are places where white-clawed crayfish do not currently occur but where they are likely to establish if introduced. Some locations could be modified, of course, to benefit crayfish, for example, by introducing a range of suitable refuges. A good ark site might include upstream sections of watercourses that are isolated from downstream reaches by impassable barriers such as large waterfalls, weirs or dams, or still water such as old quarry pools. Apart from providing suitable physical habitats and water quality, the other key feature of potential ark sites is that they are completely isolated from any non-native crayfish populations. Buglife has provided some excellent information on ark sites for white-clawed crayfish [2].

In summary, the future for white-clawed crayfish in the UK, and probably throughout its known range, looks rather bleak. However, despite the possible feeling that we are fighting a losing battle, there remain sufficient options to conserve this species if we can only secure the budget to continue to protect existing sites and to develop a network of ark sites. It is not time to give up the fight just yet, but perhaps it is the time to start fighting harder!

About the Author: Dr. Peter Walker is a Principal aquatic consultant for the ecology consultancy team within RSK, a multidisciplinary environmental consultancy. Peter leads on all RSK’s aquatic ecology projects, including those involving crayfish, and assists with terrestrial ecology projects. He can be contacted via email: pwalker@rsk.co.uk.