Home » Tracking the untrackable – Where do Melbourne’s powerful owls go at night? 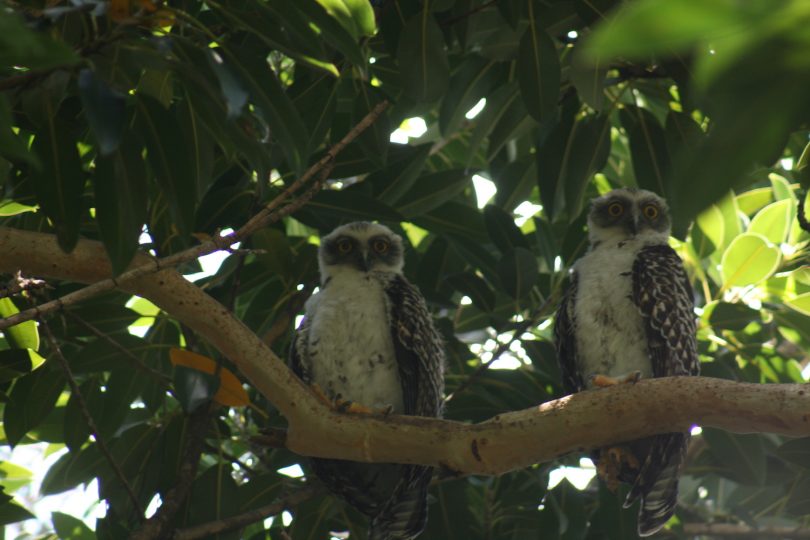 The Powerful Owl is native to south-eastern and eastern Australia, but little is known about its spatial requirements within urban areas.  In this article we find out more about how this knowledge gap is being filled, courtesy of Associate Professor John White (Deakin University, Melbourne, Australia)…

Iconic, illusive and impressive. There is no doubt there is a certain mystique about Australia’s largest owl, the Powerful Owl (Ninox strenua). Almost without exception, when people see one for their first time, the response is excitement and awe. This is amplified even more if the owl is sitting holding a decapitated possum, their favourite prey.

Our team under the leadership of Associate Professor Raylene Cooke, along with our amazing research students, and the countless wonderful volunteers, have been trying to understand how this amazing animal survives in urban landscapes. Raylene has been working on this species for over 20 years, with the rest of us coming and going along the way. What we have learned has been great, and the adventures have been fun for everyone. 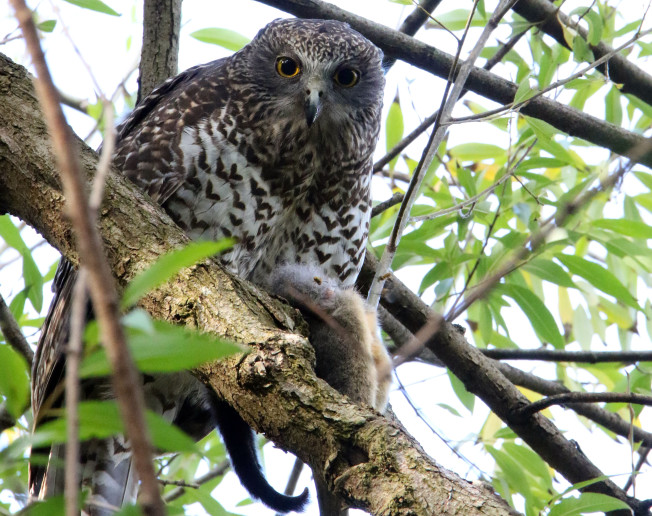 A male Powerful Owl sitting on an unlucky common brushtail possum. This owl was in a reserve along Melbourne’s Yarra River. Note: It is roosting in an exotic willow tree (which was subsequently removed as a weed management plan) (Photo credit ©John White)

We now know a reasonable amount about Powerful Owl ecology across much of their distribution. Their diet is well documented, we have a reasonably good understanding of their habitat preferences and where their habitat is, but one glaring hole has been in regard to how much space they need and how they use this space. This has critical implications for how we manage landscapes if we hope to protect this species. 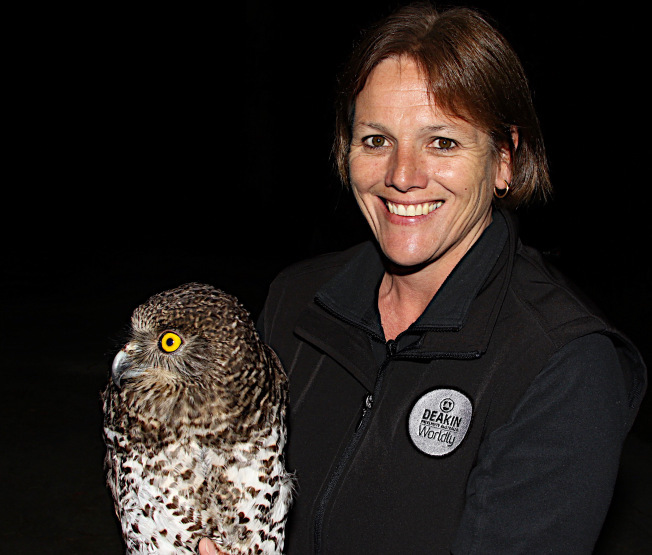 So why do we know so little about how they move around their environment? The simple answer is they are a challenge to find, and on top of this, are ridiculously difficult to capture. In fact there are only a handful of people in Australia who have successfully captured more than one owl in the wild. Unfortunately, to find out how they use space we need to be able to put a tracking device on them, and this requires them to be caught. I won’t go into capturing them, I will say we use nets and playback, and it is a game of persistence. Often it takes us several nights of work to manage to capture a single bird. 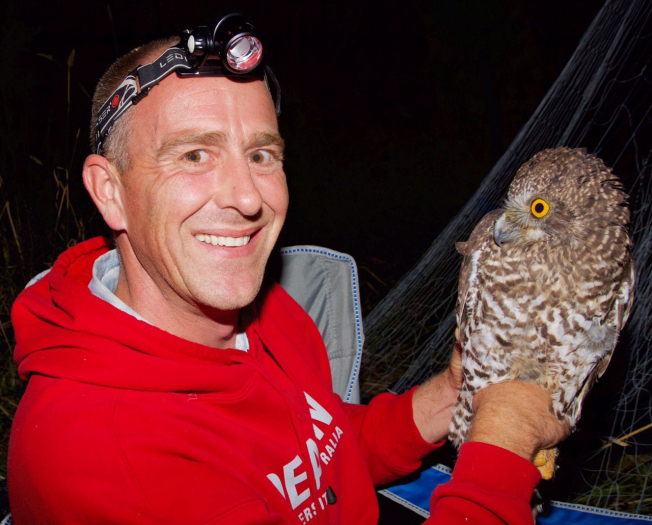 Even when you have captured an owl, the challenges keep on mounting. How do you track a cryptic, wide-ranging predator across challenging landscapes often with lots of private land? Traditionally, we would have put a radio transmitter on the captured birds and basically follow them around on foot getting locations. We have done this for a couple of birds, and I can tell you it is difficult if not impossible to get a comprehensive understanding of everywhere they go. Sometimes, they just get up and go and you can’t find them. Where did they go?…Arrive the age of the GPS.

GPS technology has been around for a long time, but it has been expensive and heavy. Now, however, costs are declining and the weights are reducing. So with that in mind, last year we decided it was time to have another go at trying to understand how powerful owls move around Melbourne and its outskirts. We may have been a little over-confident, but if we are anything we are persistent!

So we designed a unit with a cheap GPS logger and a radio transmitter packaged together, to be tail-mounted to a powerful owl. For the tech heads, each unit was on a separate battery. So the GPS logger would work for about 30 nights taking a location every 20 minutes, and the radio tracker would work for about 6 months. Some of you may have been on the ball enough to note I said “GPS logger” which means the data is stored on board. Yes, that does mean we need the unit back to get the data! The radio transmitter certainly aids us here. It helps locate the birds to target re-capture locations, or to find a tail mount that has fallen off the bird. 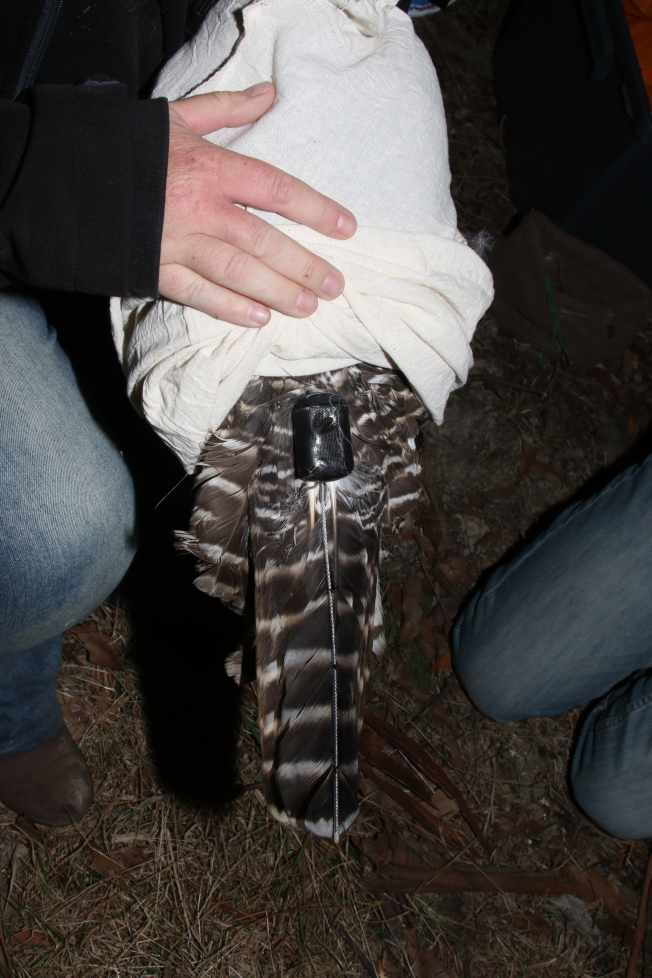 A tail-mounted GPS logger and radio transmitter package on a male Powerful Owl. Please note once the bird is released the tracker is quickly covered with feathers and the only evidence you can see is the aerial attached to the tail feather (Photo credit ©John White)

So, for the last two years we have attempted to track Melbourne’s Powerful Owl movements. This has been a massive team effort, in particular our two honours students Nick and Nick (Yep, 2 Nick’s in 2 years). Countless days in the field trying to find owls, and then many nights in the field trying to capture owls to attach trackers, and then more nights trying to get them back. Believe me, this is not an easy task and powerful owls do not give up their secrets easily. 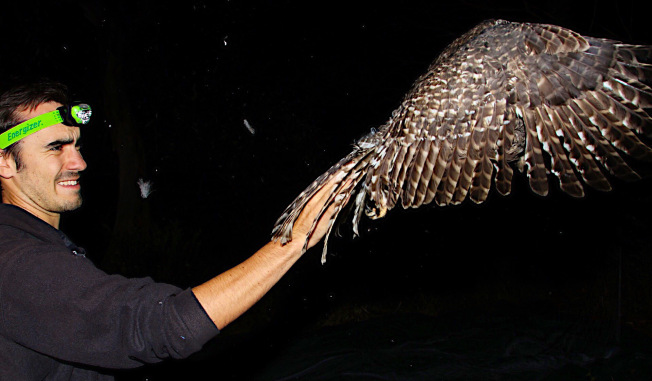 Deakin honours student Nick Bradsworth releasing a male Powerful Owl carrying a tracker. This bird ended up having the biggest home range of any of the owls we have tracked (Photo credit ©John White)

What have we managed to achieve? Let me start by saying I am generally a numbers person, and sample size is something I strive to maximise. As of last night [25 October 2017] we have managed to successfully get trackers back for 8 of Melbourne’s Powerful Owls, representing 7 different breeding pairs. Last night we finally got a tracker back from a female owl we caught in early March. Numerous re-capture attempts have failed since then, but finally yesterday the tracker fell off. Luckily the radio transmitter was still working a month beyond what we were expecting. 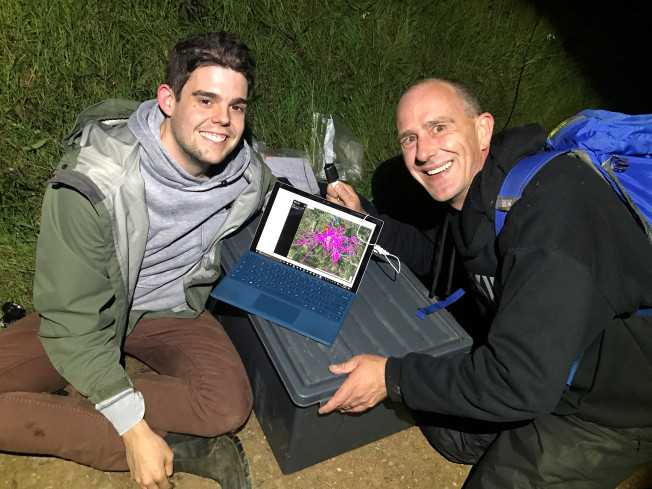 Finally! Last night we finally retrieved the tracker from our 8th Powerful Owl, 7 months since her initial capture. It is an exciting time when we get a tracker back. Tradition is the data is downloaded in the field just because there is no way anyone is willing to wait (Photo credit ©John White)

A few of the things we have learned along the way. Firstly, Powerful Owls do not give up their secrets easily. Powerful Owls around Melbourne have relatively small home ranges compared to previous forest estimates. Females cover about 415 ha, and males about 700 ha. This compares to over 1,000 ha for the few tracked forest birds. Powerful Owls appear to align their home range to avoid impervious surfaces (the highly urban areas) and utilise the trees, rivers and grassed areas.

One of the really interesting outcomes of having a GPS take a location every 20 minutes is that you get a feel for how the animals move through the landscape. If you watch the following video of a female owl on the urban fringe of Melbourne you will see how they use trees to link up the patches of forest. Hopefully, you will agree it offers an impressive insight into how these animals cope with landscape fragmentation.

As we continue to build sample size, we are starting to look at how owl ranges are aligned. Last night’s owl sat in the middle of 3 pairs of owls we had data for already. This home range effectively filled the gap between them all. Very cool!

We plan to continue to track more owls to try to get as comprehensive an understanding as we can about how these illusive creatures of the night move through our urban landscapes.

We are also currently tracking the movement and fate of a male Powerful Owl that broke its wing. This bird has spent the past 6 months with the amazing vet team at Healesville Sanctuary be nursed back to health. This will provide critical information on rehabilitation for this species, as well as provide an indication of how it moves each night while returning to the wild.

About the Author:  John White is an Associate Professor in Wildlife Ecology at Deakin University in Melbourne, Australia. John is particularly interested in how disturbance processes influence wildlife populations, and how we can use this knowledge to better manage species. John has a keen interested in introduced species and their impacts on natural and urbanised systems. John’s major research is a long-term project in the Grampians looking at the role of fire and climate in structuring small mammal communities.