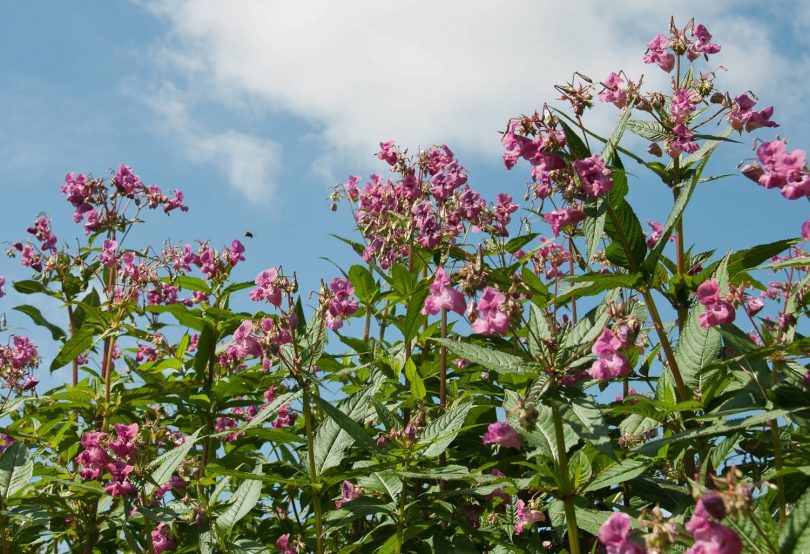 Himalayan balsam is native to the foothills of the Himalayas, India and Pakistan, and was first released into the UK in 1839 as an ornamental garden plant. Himalayan balsam grows in dense clumps and is a herbaceous annual plant, which is easily identifiable when mature. 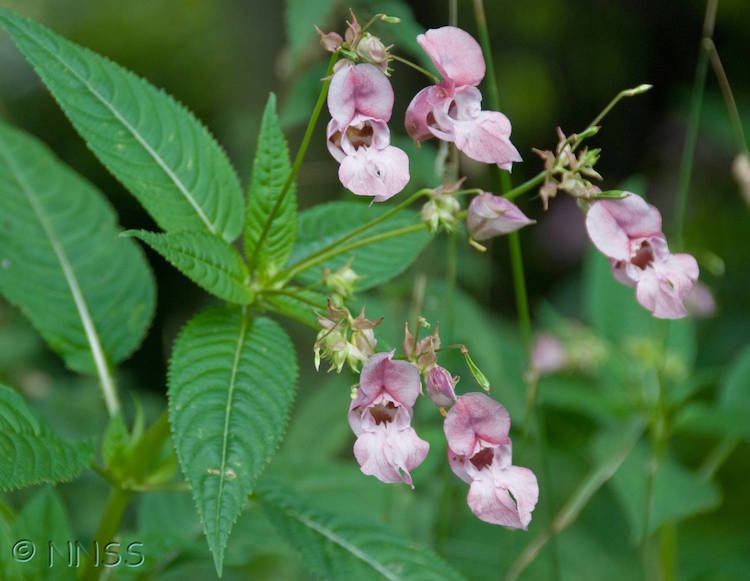 Sheep and cattle are known to graze the leaves, stems and flowers and two species of aphid are known to feed on the plant. It is also a recognised food plant of the Elephant Hawk-moth (NNSS, 2017).

Impact
Himalayan balsam is an annual plant, reproducing by small spherical seeds, 2-4mm in diameter. The seeds are highly viable and germinate early in the growing season. The seeds of Himalayan balsam persist in the soil for 18 to 24 months; however, seed persistence of up to 36 months has been reported. A single plant can produce over 800 seeds per year, with seeds being contained in exploding seed pods, which can propel individual seeds up to 7m from the initial plant. Seeds can float through flowing water and become attached to vehicles, clothing or footwear. This means that a single plant can have a significant impact on the surrounding habitat, causing an outbreak of Himalayan balsam within a time period of just one year.

Due to an absence of natural predators in the UK, dense colonies of Himalayan balsam can quickly establish, leading to adverse effects, which include: 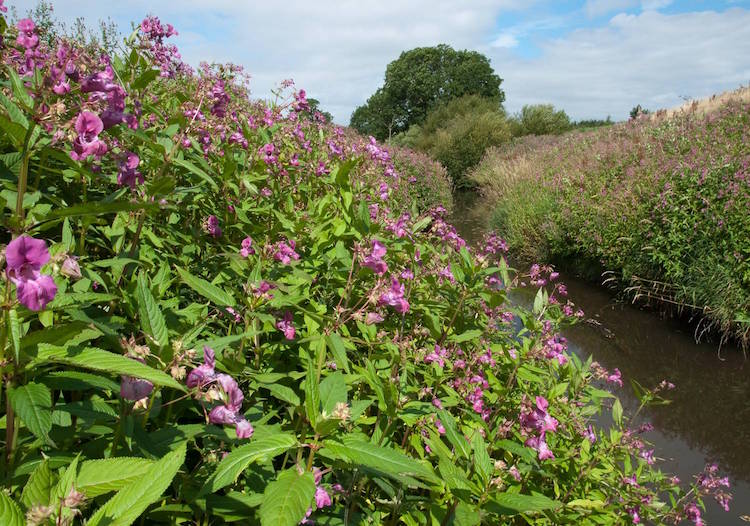 Control Measures
Control measures to date for Himalayan balsam have been largely ineffective in halting the plants spread around the UK.

A catchment level approach is typically required to achieve longterm control. Where the species is present on a neighbouring property within approximately 6m of the boundary, the seeds may be propelled onto the adjacent site following the local removal of the plant.

Due to the habitat preference of Himalayan balsam, access for removal is often problematic, which limits control options to ensure health and safety precautions are met. If control is going to be undertaken in situ, the plants must be prevented from producing seeds until the seed bank is exhausted. The existing plants can be removed relatively quickly by hand pulling, cutting the stem below the first node or use of herbicide (subject to consent from Environment Agency depending on proximity to watercourses). Two years of control action should be enough to eradicate the species. If there is a need to eradicate the plant quickly, methods such as on site burial, excavation and off site disposal can be utilised, however, this is not recommended due to the impacts on the environment and the high costs involved.

Traditional control measures may have some success at eradicating Himalayan balsam at the site or local level, but remain largely inadequate at controlling the plant’s spread at landscape scales.  Biological control methods have been researched extensively in recent years in an attempt to find an insect or plant pathogen that exclusively controls Himalayan balsam without damaging any other native species.  A rust fungus (Puccinia species) has been found, which completes its entire lifecycle on a single species and is highly specific to Himalayan balsam.  The fungus weakens the plant by infecting the stems and leaves through the growing season.  On the 23 July 2014, the Himalayan balsam rust was approved for release by Defra, making this the first fungal biological control agent to be released against a weed in the European Union. It was released at three authorised locations in Berkshire and Cornwall in August 2014, and the rust was found to spread onto field plants and complete its life cycle under UK climatic conditions. In the spring of 2015, a nationwide rust release and monitoring programme was undertaken, where the rust was released at 25 sites.  It is expected that over future years, the rust will spread around the country, weakening the plant and providing a natural control to its vigorous nature, which will allow native plants to compete and successfully establish themselves (CABI, 2017).