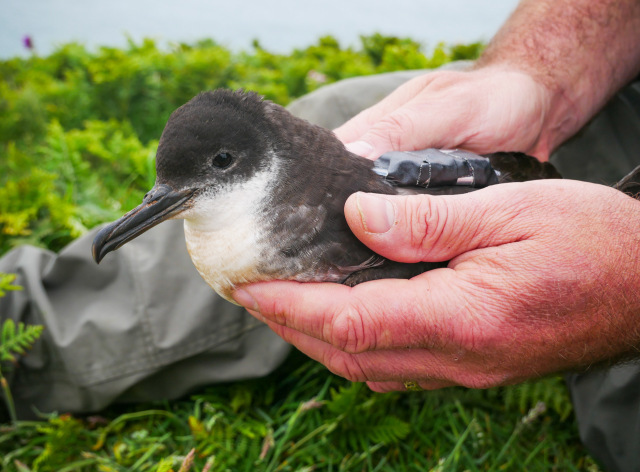 Ben Porter details his fascinating experience and preliminary findings, whilst studying Manx shearwater on the Welsh island of Bardsey…

It’s 2am, and I’m nestled amongst a swathe of bracken on the side of Bardsey mountain; the sky is brilliantly clear above and studded with hundreds of stars, and a waning gibbous moon sails across the sky to the east; aside from the rustling of bracken in a gentle northerly breeze, the only other sounds permeating the night, are the wailing cries of shearwaters, echoed by muffled calls of birds in their burrows, and the whooshing sound as birds flare their long wings prior to crash-landing on the hillside with a gentle thud.

It’s mid-August, and my daily routine has taken a drastic turn to the nocturnal realm, staying up night after night to the early hours of the morning. Why do I entertain such a sleep-depriving activity? It’s all focussed on a very special bird, and a research project I decided to undertake for my third year dissertation with the University of Exeter. 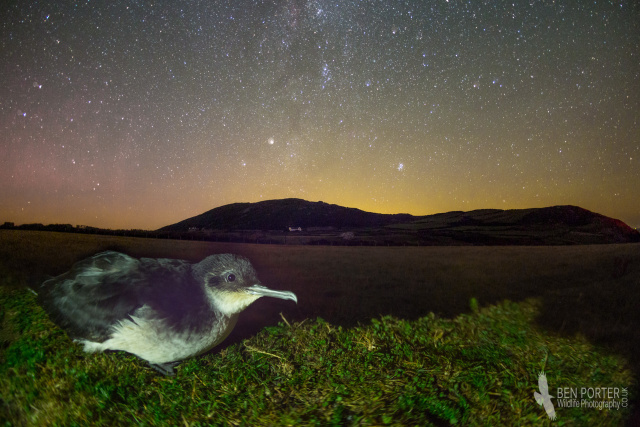 A juvenile Manx Shearwater on Bardsey Island. This bird looks almost identical to its parent, after loosing its fluffy covering of down and growing its flight feathers to full length (Photo credit: ©Ben Porter).

The aim of the project, conceived last winter after speaking to researchers at Bangor University and our own department, was to use small GPS tracking devices to investigate where Bardsey’s Manx Shearwaters foraged for food during the incubation of their egg, and then later, whilst busily provisioning for their fluffy chick. The idea was also to compare the strategies ‘our’ birds use to that of shearwaters from other colonies, like Skomer Island.

I was delighted to acquire grants from the Welsh Ornithological Society and British Birds young birder’s grant to help purchase the GPS tags necessary for the study, and I received several more trackers from Charles Bishop of Bangor University, and Kane Brides from the Wildfowl and Wetlands Trust. After months of planning, acquiring the necessary permissions, and an invaluable input of tips from Sarah Bond and Bethany Clark (both postgraduate researchers at the University of Exeter), all was set to begin the project at the start of June. 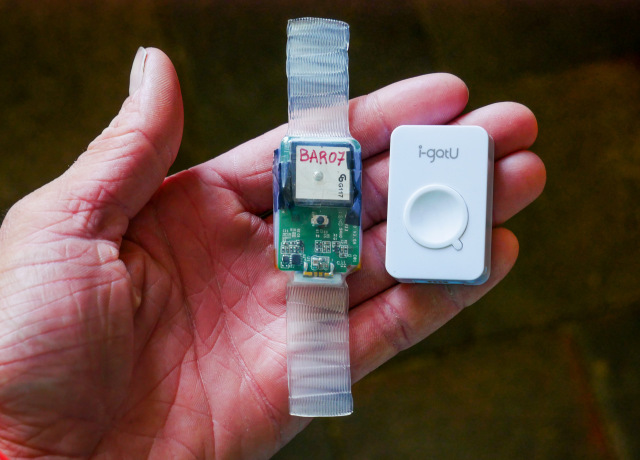 The GPS loggers I am using are i-gotU gt-120 devices. The device has to be carefully extracted from its case, before being modified, trimmed down and finally sealed in heat-shrink plastic so as to be fully waterproof (Photo credit: ©Ben Porter). 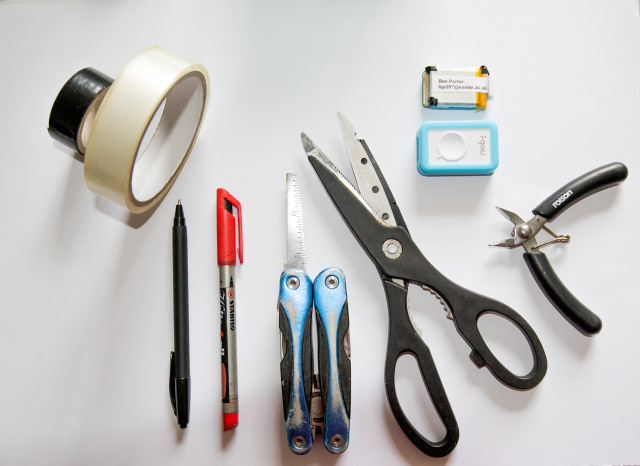 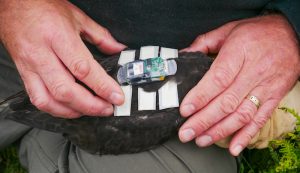 The first part of my study involved deploying the GPS trackers on shearwaters as they shared the duty of incubation. Whilst one bird takes care of the egg in a burrow deep underground, the other heads off to sea to fill up on meals of small, oily fish and squid. With the help of Steve Stansfield from Bardsey Bird Observatory, we deployed some 25 tags on incubating shearwaters between early and mid-June, waiting in anticipation of their return to discover where they had been finding food. 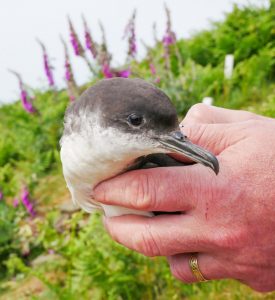 The GPS devices, as you may have guessed, are not satellite transmitters – you have to retrieve the tag to acquire the data it’s recorded. It was very exciting to retrieve the first tag: carefully peeling it away from the feathers on the shearwater’s back, before cutting open the heat-sealing plastic and plugging the device into the computer. The first track revealed a feeding foray some 130km to the north-west of the island in an area of sea just south of the Isle of Man. 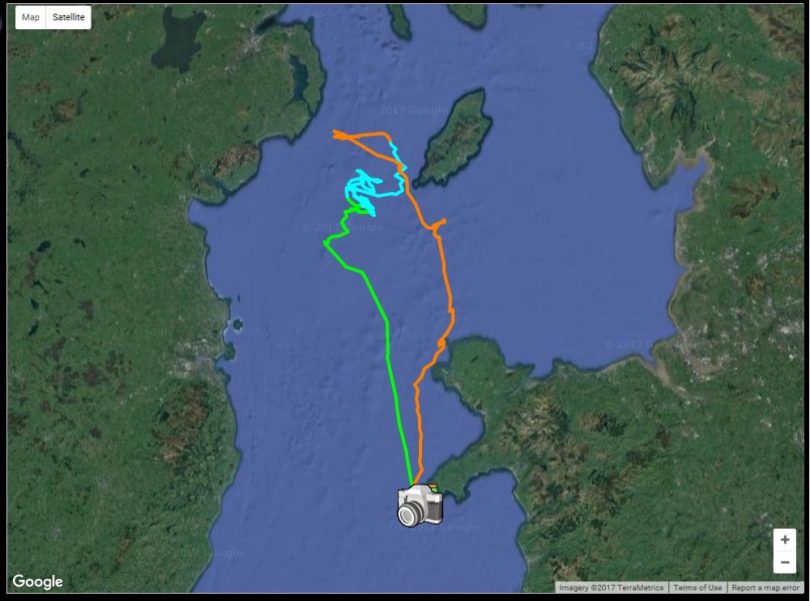 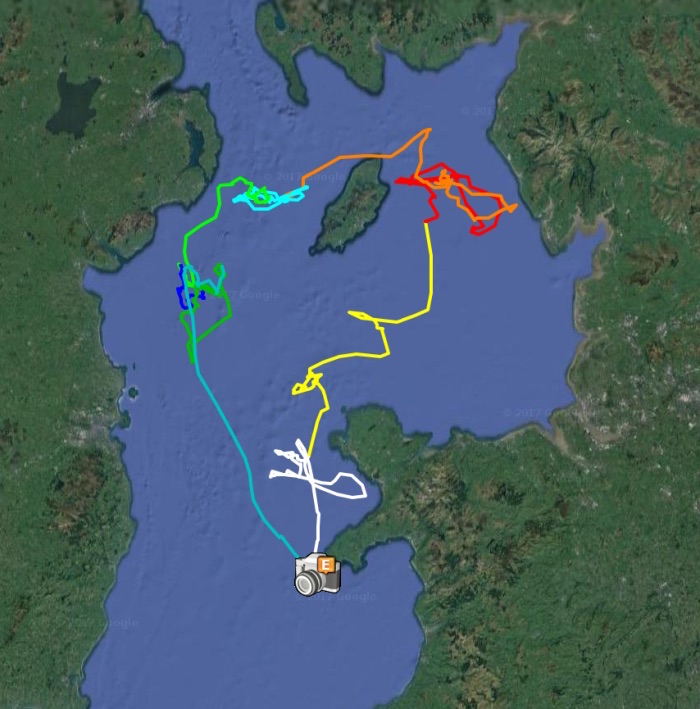 The rest of the shearwaters we tagged followed much the same pattern: leaving the island during the night after a swap-over with its partner, before making a b-line for this area of the Irish Sea, which is referred to as the ‘Irish Sea Front’.

The Irish Sea Front forms where two tidal fronts meet and creates an incredibly productive region of the sea, blooming with zooplankton. This primary producer, forms the base of a diverse foodchain benefitting a plethora of marine animals, including internationally important congregations of Manx Shearwaters. This area was designated as a Special Protection Area due to its importance as a feeding ground for breeding shearwaters: research has already shown that birds from Rhum (Scotland), Skomer (Wales) and Copeland (Ireland) all utilise this productive region. The findings from our tracking this spring adds further impetus to the importance of protecting this highly productive region. 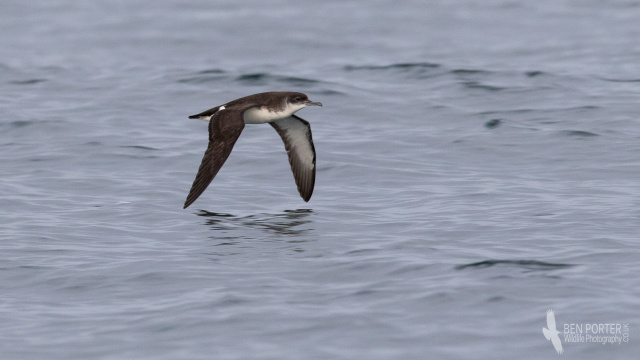 An adult Manx Shearwater in flight. With their high aspect ratio wings (long and thin), shearwaters employ a flight pattern known as ‘dynamic soaring’ to cover large distances whilst minimising energetic demands. This technique is where a bird exploits the vertical gradient of wind speeds that occurs over the sea (known as wind shear). Bird like albatrosses climb up and across the wind shear layer (into the wind), before turning and descending across the wind shear in a downwind direction. The cycle then repeats, heading back upwind with its velocity gain from the glide (Photo credit ©Ben Porter).

What else did we discover from the incubation tracking phase? Birds spent up to 14 days out at sea before returning to their burrow – a long time to be sat in a burrow not feeding! The mean foraging trip length, however, was only 8 days. This may hint that feeding was not the best this year, which is a suspicion also shared by Skomer Island’s researchers this summer. 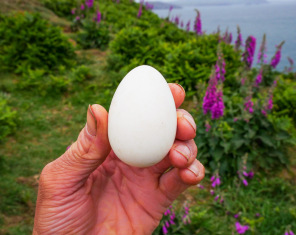 Most of the island’s shearwaters time the laying of their eggs with the April full moon, so that their chicks also hatch out around June new moon some 50 days later. The chicks hatch out at a weight of some 40 grams, and standard practice is to wait until they have grown to around 200 grams before resuming tracking on the adult birds. 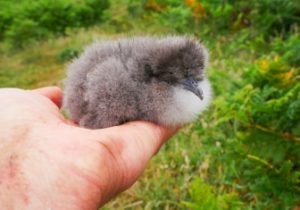 And so, at the end of July, it was back to work: I patrolled my study burrows every 15 minutes after darkness had fallen, waiting for the adult birds to return to feed the chick. After the parent had regurgitated it’s fishy meal to an expectant chick, Steve and I would attach a tag to its back and place it carefully back in the burrow.

Then comes the waiting game! Ensuing nights involved patrolling the burrows at regular intervals until as late as 3.30am before the birds returned with the precious tag! To make matters more interesting, some shearwaters will stay out at sea for up to 10 days before returning to feed the chick, whilst the other member of the pair returns every night with a meal.

A fascinating study by Shoji et al (2015) found that pairs actually coordinate their feeding activity and employ what’s known as a ‘dual foraging strategy’. One parent will forage locally to the colony, bringing back meals to the chick every night (so increasing the offspring’s fitness); at the same time, the other parent will head off to a more productive region for over a week, during which time it feeds solely for itself (increasing its own fitness). The pair will then make a swap so that duties can be reversed.

Despite the sleepless nights, the results from the current stage of the project have been very rewarding… 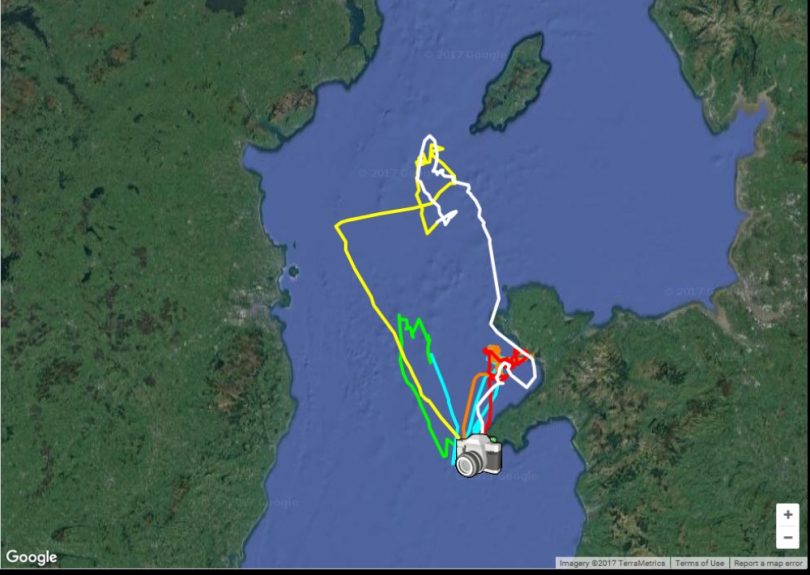 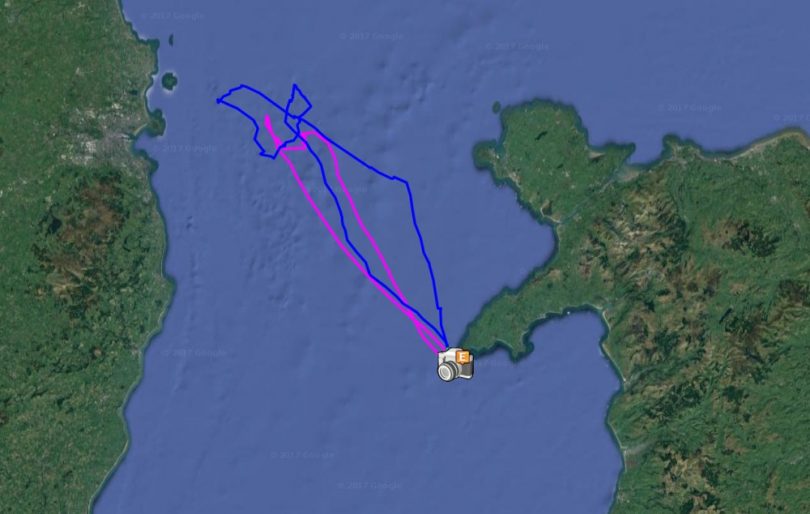 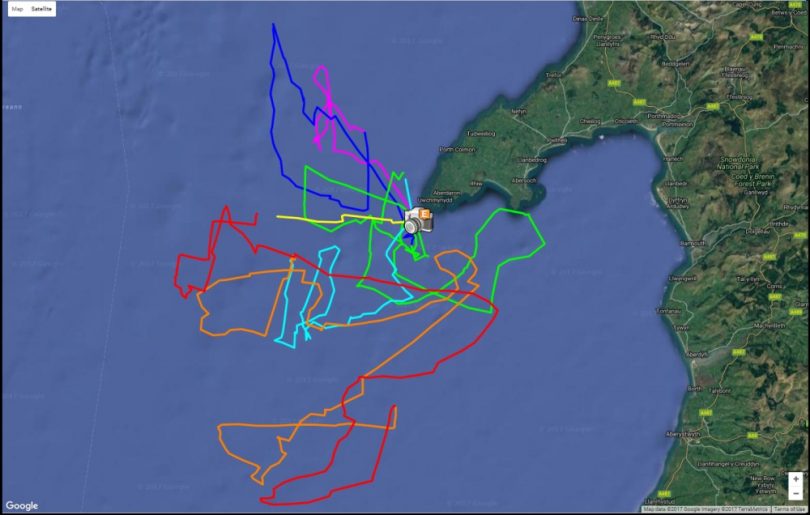 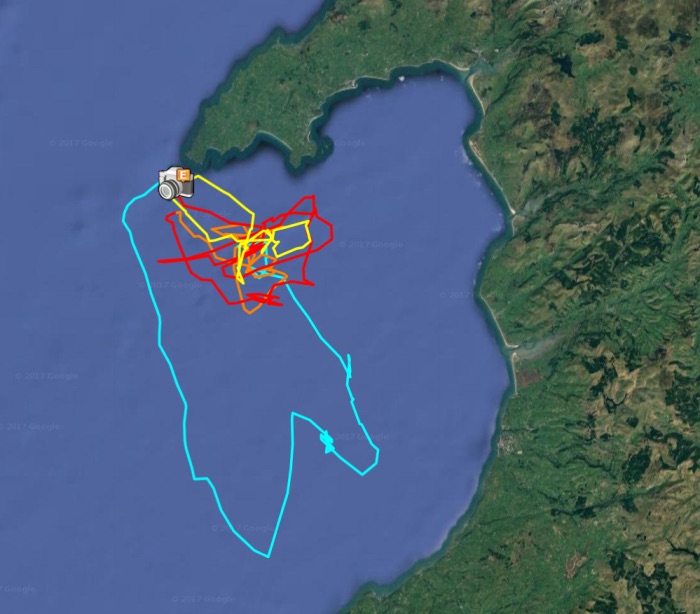 Each of the screenshots above illustrates the GPS track of a single adult shearwater, the different colours denoting different days.

As you can see from these four images, a variety of foraging areas have been utilised by the island’s Manx Shearwaters so far. Some birds have been foraging for food rather locally to Bardsey, occasionally heading south into Cardigan Bay on a feeding foray. Other birds have headed north-west to the Irish Sea Front, just south of the Isle of Man.

The most common provisioning strategy we’ve identified so far, is where the parent bird spends the day out at sea finding food, before returning to feed its chick each night. Two birds, however, gave us quite the surprise when downloading the data… 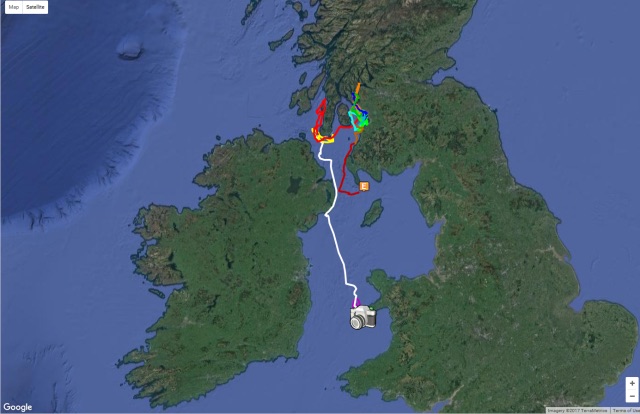 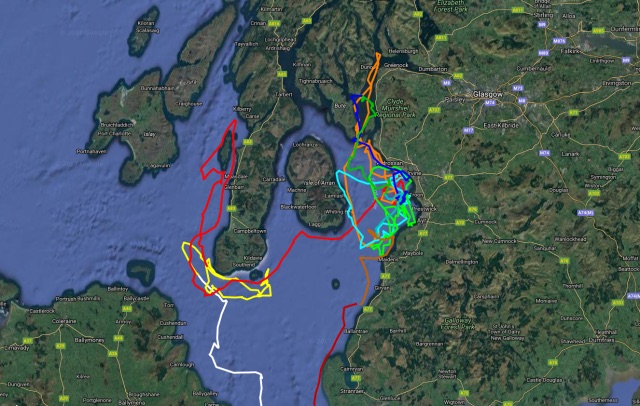 This remarkable feeding trip records an adult shearwater flying almost 250km due north to the Firth of Clyde – less than 40km from the streets of Glasgow! It spared no time in blasting up to the area after a brief visit to the nest overnight, before spending seven days foraging very close to the coast in the Inverclyde.

Whilst birds from Skomer have been shown to visit this area before, the interesting thing about ‘our’ bird is how close to the coast it was feeding, and how far up the Clyde it travelled. Speaking to birders from the area, the Inverclyde receives an annual inundation of shearwaters, often peaking in their thousands by mid-August – what exactly they are feeding on is unclear, although likely to be small Copepods, oily fish like Herring and Sand Eels. As the local birders exclaim, it was always assumed the shearwaters they were seeing were Scottish – not from small Welsh islands a few hundred kilometres away! 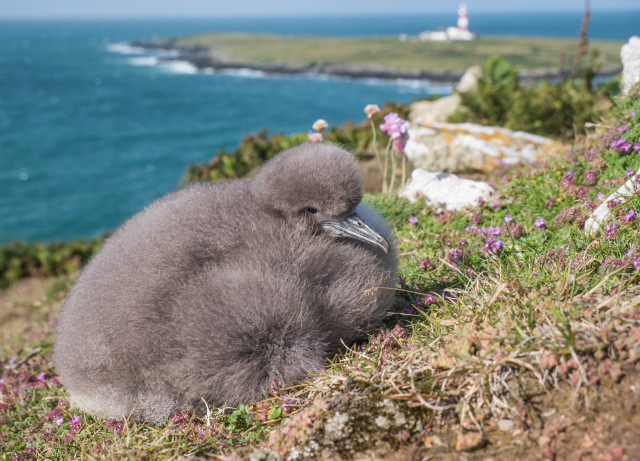 The shearwater’s chicks are growing bigger by the day – some over 600 grams now! They’ll need to finish growing their primary feathers, lose all that fluffy down and slim a little before they are fit to make the epic trip to South America! (Photo credit ©Ben Porter)

Steve and I have deployed 20 tags over the last two weeks [August], and all that’s left to do now is wait patiently beside their burrows every night to await their return!

I look forward to really getting to work on the data I have collected over the coming months and winter, whilst comparing this year’s tracking data to that of Skomer Island.

About the Author: Ben Porter is a young naturalist interested in everything from birding to moth-trapping, snorkelling to mammal-watching. He is also an award-winning wildlife photographer, based on the small island of Bardsey, off North Wales. Ben is currently studying a degree in conservation and ecology with the University of Exeter, based in the lovely town of Falmouth. You can find a link to Ben’s blog – ‘The Island Naturalist’ – HERE.