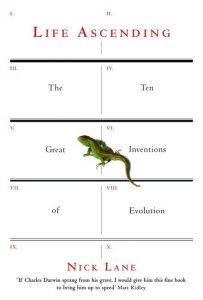 I hate biochemists. Call it petty envy, I don’t care, I’ll happily admit it. Perhaps it’s the bitter memories of seeing my university colleagues head off to tinker with their expensive equipment in over-funded labs whilst there I was, in the back of a van, sifting through dead bugs with plastic tweezers. Maybe it’s the thankless task of trying to make sense of their overly complex metabolic pathways; to be frank, it’s having to begrudgingly admit the importance of their research, which does nothing to alleviate the tedious slog of reading through their dry, stale academic papers. So, it’s deliciously ironic that one of the more accessible and engaging accounts of life should be delivered by none over than a biochemist. Well played.

Life Ascending is a run down of evolution’s 10 greatest hits, or as Lane calls them, ‘inventions’. These are defined as evolutionary game-changers; adaptations that have transformed life’s landscape since their initial conception. Lane devotes an entire chapter to each; however, being a biochemist, he’s less concerned with the flashy crowd pleasers (e.g. flight, predation etc.) as he is with the likes of photosynthesis or DNA. Despite my urge to fall asleep at such topics, my main concern was that surely these went without saying – like listing ‘human’ as a preference on a dating app. That’s until I realised that the book wasn’t just celebrating life’s handy traits, but also giving a detailed account as to how they may have first evolved.

Armed with a biochemist’s lens, Lane does away with the vague speculative prose that so often accompanies evolutionary history and divulges the nitty gritty detail, down to the passing of individual electrons. By appreciating the mechanics, the reader is imbued with a profound understanding; not just how life evolved these adaptations, but also how easily it could not have evolved them in the first place. Here he has exercised a superb argument for the chaotic nature of evolution over the traditional fatalistic attitude. We’re invited to imagine a plausible alternate reality of life on earth, devoid of the likes of an oxygen rich atmosphere or complex-celled lifeforms, and the result is one of the most stimulating reads I’ve had in a while.

I’d force this book on every science professional, student or general reader, if only to make them read the first two chapters on the origin of life and evolution of DNA. He moves away from the dated organic pea-soup theories and proposes hydrothermal sea vents as a likely candidate for the source of life. Although this sounds more like something out of a sci-fi novel, the level of detail he goes into, as well as the sheer volume of evidence he provides, makes for a convincing (even if not definitive) argument.

My one issue with the book, admittedly more of a pedantic annoyance than a genuine criticism, is with the final chapter on ‘death’. It took me longer than usual to get through the first pages, it’s hard to focus your eyes on a text when they’re busy rolling in every direction. “Oh so there was life happily getting along being immortal, then whoosh something evolves the ability to die and takes over?” As I read on, I realised this wasn’t detailing an evolutionary ‘invention’ so much as summarising the biology of ageing and the extension of life. Whilst still a fascinating read, it would have been better placed in a different book.

About the Author (article): Charlie Hearst is a nature blogger with a penchant for bats, animal behaviour and evolutionary history. Often seen pestering researchers and ecologists, whilst tagging along to wildlife surveys and expeditions. Check out his articles, photography, artwork and soon to be released podcast on his twitter, Facebook, instagram and blog.