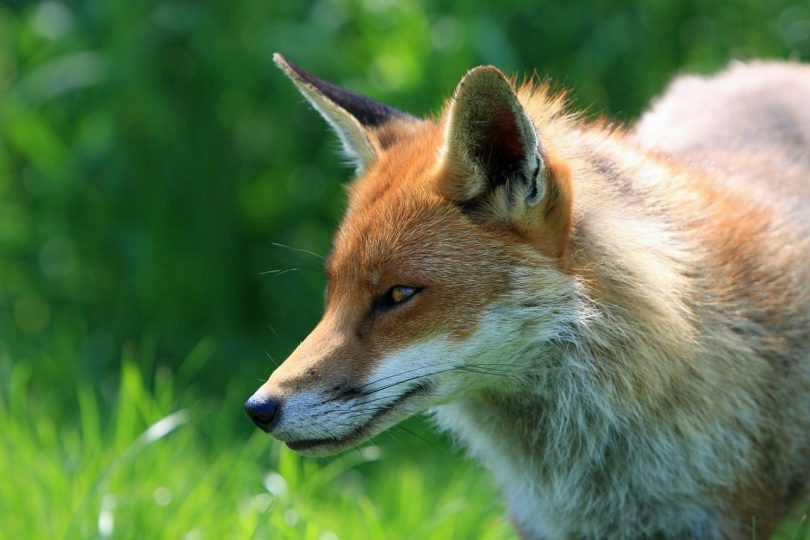 The River Avon flows through and adjoins a number of counties in central England.  Mark Smith has spent the last three years monitoring a patch of land alongside its’ banks. In this article Mark explores the findings to date of this fascinating project…

In 2009, I was lucky enough to rent 1.75 ha of wet woodland and inundation shrub from a local landlord, next to a patch of the River Avon that I had been surveying for birds since 2002. The plan was to cultivate this small patch into a wildlife haven, but the more I investigated the area, the more I realised that the mixture of habitats already exhibited great diversity and so I started by cataloguing it. After some preliminary vegetation and tree surveys I set up a Bushnell Trail Camera to reveal what mammals used the site. I was quietly pleased as the first few days’ worth of clips showed badgers (Meles meles), wood mice Apodemus sylvaticus), fox (Vulpes vulpes) and muntjac (Muntiacus reevesi). My mind turned to further analyses I could make and in April 2014 I began a long-term monitoring project.

I decided to record all mammals and birds passing along a hedgerow that marked the northern boundary of the site. I used a Bushnell Nature View HD camera, affixed to a beech tree at 1m height, facing north. The camera was set to record 30 second clips on every activation, with a one second refresh time. 8 MB SanDisk memory cards were used to record the data and these were changed weekly when battery life was also checked. The card’s data were downloaded and the species present recorded, with any interesting behaviours noted. 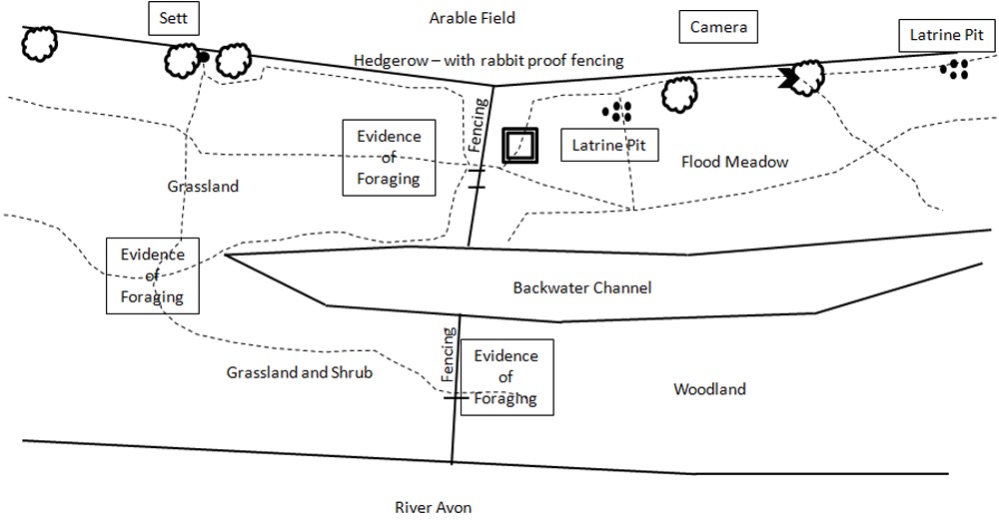 As of August 2017, the cameras are still rolling with plans to collect at least five years’ worth of data in total. This April the camera was replaced with a Bushnell Trophy Cam HD and an LTL Acorn 6210MC was used as a back up when the main camera was broken. Over the past three years, a vast amount of data has already been collected and analysed, and it is now possible to look at some of the patterns of the animals recorded.

Most camera trapping surveys have inherent problems. To get sufficient coverage for target species, multiple cameras are needed and in several locations, these are subject to damage and the effects of the weather. Multiple cameras, and indeed a single camera running over an extended period, generate a great deal of video clips or pictures to analyse. Some projects like Snapshot Serengeti in Tanzania make use of citizen scientists to process the large volumes of images.

In my case, each 30 second clip was checked and the presence of animals recorded. Identification was surprisingly not a problem; by using video clips rather than images, it was possible to combine behavioural clues with the visual images to identify the species.

In this study, the camera was in operation for 88% of the time. 132.2 days were lost to various errors that embarrassingly included forgetting to switch the camera on after checking the card. Monitoring the battery usage was important as low batteries would allow the camera to only work during the daytime. The correct type of battery was particularly important and it was noted that the batteries drained quicker when temperatures fell below zero degrees Celsius.

In 2015-16, a more careful analysis was made of the number of times the camera activated but nothing was recorded. These were termed activations only and occurred when wind or rain triggered the camera. Sometimes insects or birds on the camera caused an activation and sometimes the animal moved too fast past the camera and was out of shot before recording could begin. Over the year in question, the camera was activated 2,860 times (23.83 hours of footage) and 43.9% of all videos were of activation only and yielded no data.

Over three years, 10 species of mammal and 12 species of bird were recorded by the camera.

*Incidence of presence indicates the number of ten-minute slots in which the species was recorded, over the year.

The sighting of a polecat (Mustela putorius) from some rather poor footage was confirmed by the Vincent Wildlife Trust although it is impossible to tell if the individual was a pure bred or ferret hybrid. The smaller mustelids are much less frequently seen. Both mink (Neovison vison) and stoat (Mustela erminea) have been seen on the site but neither use the hedgerow as a corridor. Their small size probably allows them to move unimpeded at will across the site and not always past the cameras.

By placing the presence of each species into 10-minute presence/absence blocks for each year, it was possible to identify seasonal patterns in behaviour and also the times of day the species in question was active at this one location: 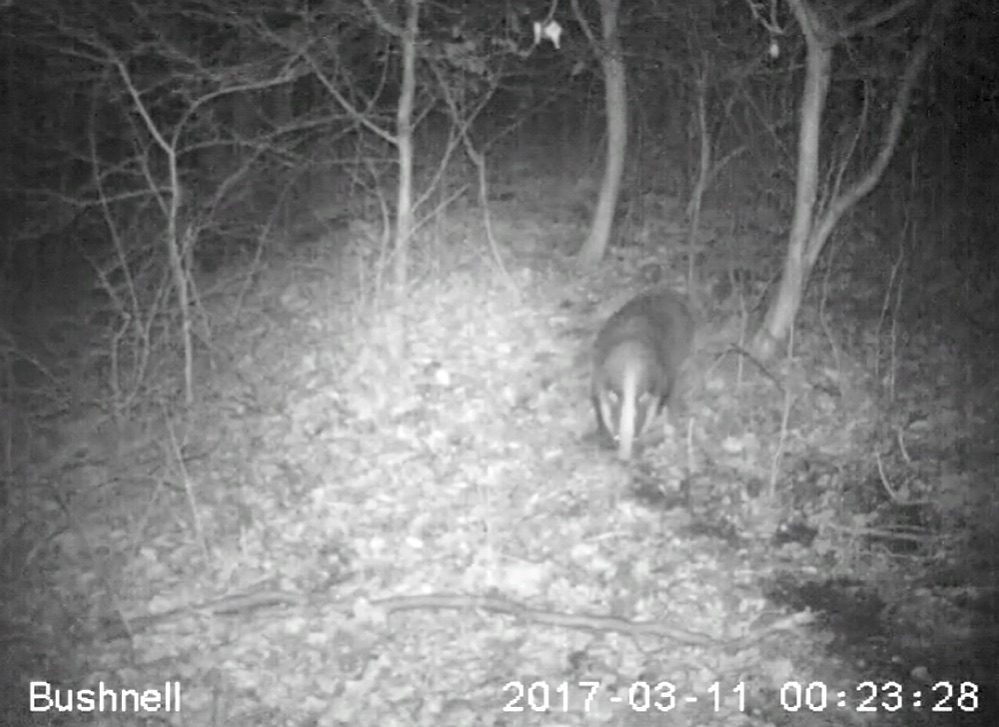 Badger
The data for the badger was the most interesting, and highlighted a range of behaviours. They were the most commonly recorded mammal species. A main sett was identified 200m from the camera trap and the hedge-line was part of a foraging trail between two occasionally used latrine pits.

In all three years there is a marked increase in activity in February, this coincides with the time cubs are born in the setts (Neal & Cheesman, 1996), which is usually in the first three weeks of February (Harris & Yalden, 2008). Footage, at this time, reflected a general feeling of increased activity. Passage past the camera seemed quicker and more frenetic. There was also an increase in the amount of casual marking made by the males. It is suspected that the birth of the cubs promotes a level of excitement and activity in the clan. Sows that had just given birth are now able to come out and feed; they need to maintain their body weight in order to produce milk. Boars, in a burst of protectiveness could be more actively marking their territory to ensure the new additions and their home range are adequately defended. Research supports the idea that males are more active and travel more (Neal & Cheesman, 1996; Revilla & Palomares, 2002).

Secondary smaller peaks in April and May likely coincide with the cub’s first emergence from the sett. No cubs were recorded on the camera – it is likely to far from the main sett, although smaller individuals were observed later in the year. Emergence from the sett would free up sows from suckling duties and enable them to forage further. The peak also corresponds to recorded activity peaks surrounding the main mating period in early spring (Harris & Yalden, 2008).

Interestingly the biggest peak in 2015-16 was in September and could perhaps relate to an increased activity at the close of the breeding season, whereby individuals are encouraged to find new territories.

Fox
The activity of fox on the site declines over the study period, but this is due to high activity in the first year; in this first year a vixen had a single cub. She spent a lot of time foraging, and the hedgerow was a direct link between the den to the north and foraging territory to the south. She was recorded carrying wood pigeon, rabbit and small mammals to the den site. The peak in activity is matched by the daily cycle in which, during non-offspring years, activity past the camera is at dawn and dusk, whilst in offspring years, there is an increased incidence of daytime records. Sadly, the vixen died in late 2015 and no breeding has occurred since. Recently, two foxes have been recorded but is unclear yet if they will pair.

Overall only one mammal species is recorded in any ten-minute block although the time between a fox being present and a rodent emerging is surprisingly small. A notable interaction was a stand-off between a badger and fox. The encounter was one of disgruntled tolerance by the two species rather than outright aggression. In 2015 a Fox unexpectedly encountered a male pheasant and began to stalk it but was ultimately unsuccessful. 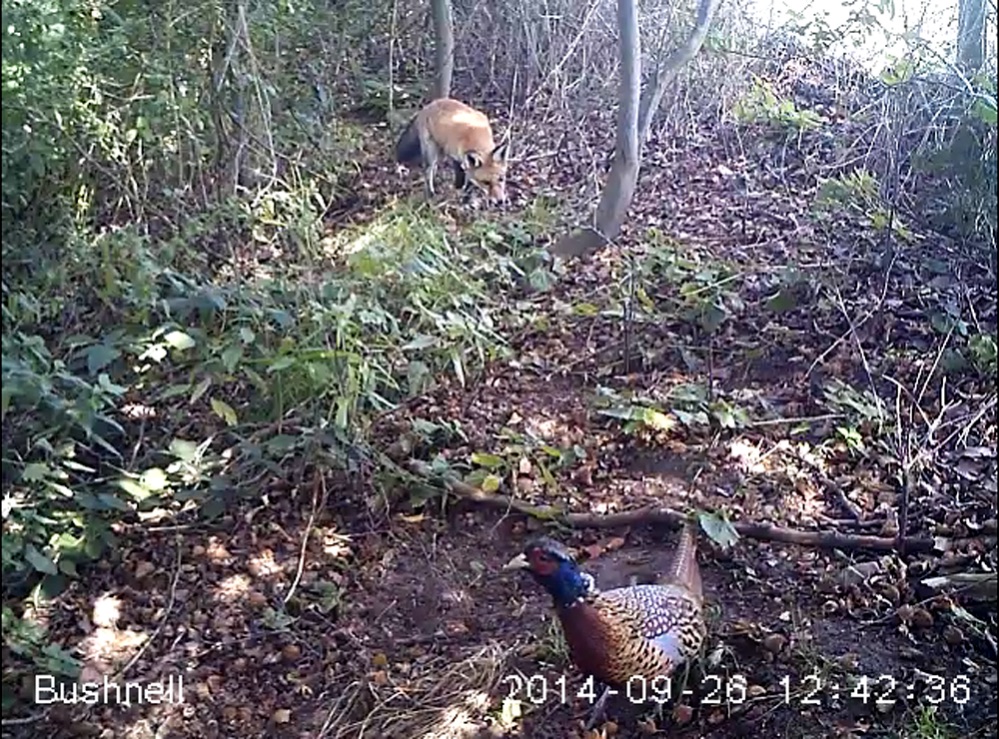 Muntjac
Muntjac are a frequent visitor and both males, females and young are recorded. They are often in pairs or small family groups. There is plenty of scrub and woodland near the site, as well as a railway that bisects the river further north. It is believed they are using the river and railway as a corridor for dispersal. There is very little pattern to their presence during the year.

Grey Squirrel
During autumn months, grey squirrels are by far the most active species. The number of grey squirrel activations appears highly related to the success of the beech mast crop that year. In 2014 an excellent season resulted in great squirrel activity and some great interactions – at least two individuals buried nuts for the winter.

Going forwards
The project continues to record excellent data, although it is possible that the new camera does not pick up the rodents as well as the old one. This will be verified with small mammal camera trapping using baited equipment. From 2016 the survey has been extended to record how the direction in which badgers, foxes and muntjac travel varies throughout the year or day – is there a greater flow in one direction for the more transient species such as the muntjac? Already this year a new species, roe deer (Capreolus capreolus), has been recorded.

With the cost of cameras coming down every year and their quality and functionality increasing exponentially, the use of camera traps is now something affordable to all and allows monitoring of populations on a new level.  Instead of it being restricted to checking on remote tiger populations, even the most amateur naturalist can observe the nightly goings on in their own back garden and it is astounding how much can be learned from such studies.

About the Author: Mark is an amateur ecologist who trained at the University of Aberystwyth. Mark runs a website (link HERE), where he publishes his varied research interests. He has been a regional representative for the BTO for the past 8 years and has consulted with Warwickshire County Council and other local wildlife bodies on several conservation projects. Aside from the camera trapping Mark manages a small patch of land and has been recording wildlife on the same patch of the river Avon for 15 years. Mark blogs on all matters wild.  Link to his blog is HERE.  Mark can be contacted via admin (at)wildwarwickshire.co.uk.