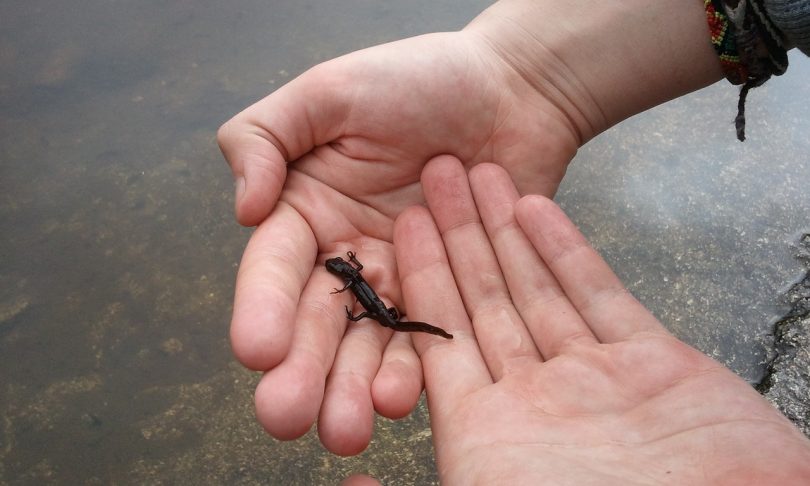 Late spring and early summer is the time of year that juvenile temperate breeding amphibians undergo post-metamorphic dispersal, but are these movements random or targeted?  Laurence Jarvis (Head of Conservation at Froglife), sheds more light on this subject…

Post-metamorphic dispersal movements are defined as “unidirectional movements from natal sites which ultimately result in individuals finding new breeding sites” (Semlitsch, 2008). Newly emerged metamorphs are often extremely small and vulnerable to external environmental factors. For example common toad (Bufo bufo) metamorphs may only be 10mm in length and therefore have less locomotor capacity and are subject to more rapid water loss than adults. In addition, due to their tiny size and very active behaviour during periods of light rain, rates of exposure may be quite high relative to their body mass. This life stage may represent the period when amphibians are most at risk to harmful effects from exposure to pesticides and other chemicals. Due to their small size and vulnerability, in the first year juvenile amphibians are most likely to be limited to areas adjacent to the breeding pond where they feed, continue to grow, and find over-wintering sites. It is not until later in the season or after the second or third year, when juveniles are larger, that they move greater distances and seek alternative breeding sites. Therefore finding suitable resting habitats where they can seek protection is crucial in the early weeks of life.

Since metamorphs have no prior knowledge of the habitats surrounding ponds, it might be expected that individuals disperse randomly into terrestrial habitats. In a review of the dispersal of European and North American amphibians, Semlitsch (2008) concluded that there is little evidence to suggest that juvenile amphibians have specialized abilities to find new or alternative breeding sites, such as a water-finding ability or by using sounds of breeding choruses of anurans, which might indicate that juveniles exhibit target-oriented dispersal. In his review, Semlitsch (2008) suggested that newly metamorphosed individuals disperse from natal ponds in a random pattern relative to landscape features beyond the pond perimeter and subsequently find new or non-natal breeding ponds primarily by chance. For example, results from a study on Red-Spotted Salamanders (Notophthaltnus viridescens) from Missouri, USA indicated that although adults leaving breeding ponds oriented with respect to forested habitat, metamorphs tended to disperse from the pond in all directions, with 42% emigrating towards the forest and 58% emigrating towards the grassland. Both adults and juveniles of this species are unable to cross grassland, with forest habitats favoured. Those metamorphs emigrating towards grassland experienced higher mortality. 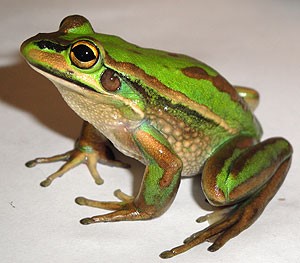 However, a growing number of field studies have found that metamorphs of some species do exhibit targeted, non-random movements towards favourable habitats, despite having no prior knowledge of the surrounding habitats. Recent research on Australian Green and Golden Bell frogs (Litoria aurea) suggests that newly emerged metamorphs preferred the habitat closest to the presence of other metamorphs of the same species (Figure 1). The advantages of using conspecific cues to determine dispersal direction is to reduce search costs by spending less time searching in non-suitable habitat and seeking out suitable habitats more effectively.

A field study on Great Crested Newts (Triturus cristatus) and Smooth Newts (Lissotriton vulgaris) indicates that non-random dispersal of both adults and juveniles may occur when leaving ponds. Juveniles of both T. cristatus and L. vulgaris migrated faster and to a much greater distance from the pond than their conspecific adults (Figure 2). A high percentage of freshly metamorphosed juveniles of both species showed the same clear preferences for a woodland habitat like the adults. This is surprising, as the juveniles lack the familiarity with the quality of their terrestrial surroundings. The results therefore indicate that juvenile newts possess a method for detecting and orienting towards favourable habitats that probably become modified later in life by individual experience. In addition, Hayward (2010) demonstrated that great crested newts were able to identify chemical cues left on the substrate and follow the route taken by previous newts. This suggests that metamorphs may follow adults to terrestrial and possibly hibernation sites.

Conservation implications
A knowledge of the core terrestrial habitat requirements of a particular amphibian species is required for local protection of populations. Understanding how and in what directions metamorphs may disperse is important in limiting mortality in a human-dominated landscape. If metamorphs of a particular species have the capacity to orient towards favoured woodland habitats, this may avoid unnecessary mortality. However, if individuals disperse randomly from ponds, in a landscape where suitable terrestrial habitat is limited, high rates of mortality may occur if individuals orient towards roads, barriers or other human hazards. Therefore a knowledge of the behavioural tendency of species or stages during dispersal might be critical to directing conservation efforts. However, at present, the phenomenon of dispersal in amphibians is poorly understood and needs more attention. In particular, the potential relationship of sex, body size, density-dependence, population size, habitat quality, and land use to dispersal tendency and behaviour needs to be examined.

All images are ©Froglife
First posted on www.froglife.org on 26 July 2017.

About the Author: Froglife is a national wildlife conservation charity concerned with the conservation of the UK’s amphibian and reptile species and their associated habitats.