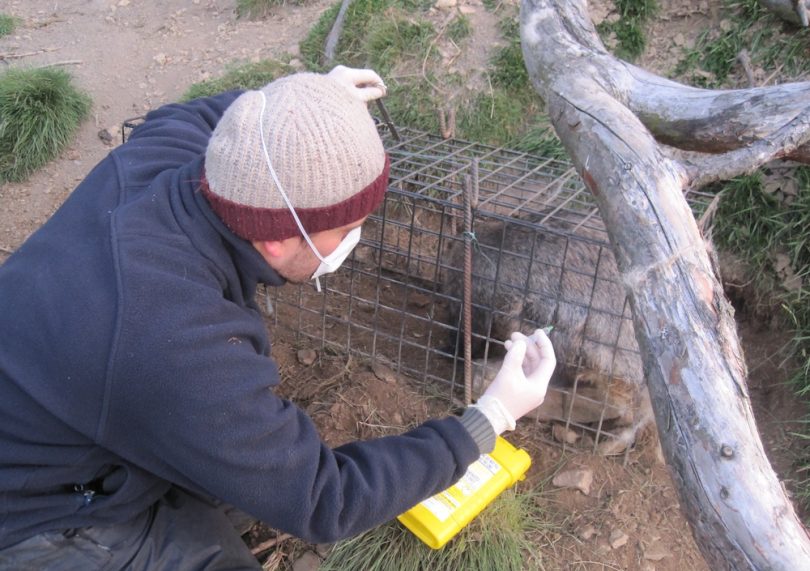 Derbyshire Wildlife Trust has defied the odds to resume badger vaccination one year after vaccine supplies dried up.  In this article, we find out more…

The Wildlife Trusts are delighted to announce that a scheme to vaccinate badgers against bovine tuberculosis (bTB) is now underway again, one year after vaccine supplies dried up.  In December 2015, the World Health Organization announced that there was a global shortage of TB vaccine for humans.  This meant that The Wildlife Trusts had to suspend their badger vaccination programmes during 2016.

Now a new supply of vaccine has been obtained by Derbyshire Wildlife Trust following several months negotiating supplies and obtaining permission from the Veterinary Medicines Directorate to import the InterVax TB vaccine. Derbyshire Wildlife Trust Chair and veterinary surgeon, Dr Sue Mayer, who secured the vaccine from a Canadian company has also been training twelve dedicated volunteers in how to use the new vaccine delivery system.  Thirty badgers have already been successfully vaccinated, including twelve badger cubs, and the next round of vaccinations is due to start on Thursday 6th July. Vaccine from the same source was used to successfully vaccinate badgers in the Republic of Ireland in 2016.

Dr Mayer says: “Derbyshire Wildlife Trust is delighted to be leading the way across the country and vaccinating badgers against TB in 2017. UNICEF now say all country needs for human TB vaccine can be met so we wanted to start vaccinating badgers as soon as we could. Vaccination is a better solution than culling which research indicates can spread the disease further. It’s also cheaper and avoids the indiscriminate killing of healthy animals.”

Nottinghamshire Wildlife Trust have also obtained doses of the InterVax vaccine and will begin vaccinating badgers on a large area on the Nottinghamshire/Leicestershire border imminently. Working with local landowners, they have now surveyed around 60 farms, over an area of more than 50km2. Traps have been placed out on participating farms with the help of 40 volunteers in order to target badgers from around 20 active setts.  Vaccination will continue until Autumn and will build on previous work which began in 2015 to build TB immunity in Nottinghamshire’s badgers.

BBOWT’s badger vaccination programme is resuming in early July, and will continue through the remainder of the vaccination season, which runs until November.  Badgers will be trapped and vaccinated in a 15km2 project area around their nature reserve at Greenham Common in West Berkshire, before the team moves to the nature reserves in west Oxfordshire.

Defra is committed to securing vaccine for badger vaccination programmes in 2018 and Trusts will be discussing this renewed support this summer. More about badger vaccination here. The Wildlife Trusts are firmly opposed to the badger cull.

All images are ©Derbyshire Wildlife Trust

The vaccine being used by Derbyshire Wildlife Trust, Nottinghamshire Wildlife Trust and BBOWT is the closest to our normal vaccine and is the only alternative which has been imported for use in badgers. It was used in the DAERA TVR project in Northern Ireland last year and also the Republic of Ireland’s badger vaccination programme.  It was also imported for use in our human BCG vaccination programme. The vaccine, called BCG Sofia, is manufactured in Bulgaria by a Canadian company called InterVax. Trusts obtained Special Treatment Certificates from the Veterinary Medicines Directorate to import and use the alternative vaccine.

Derbyshire Wildlife Trust’s Badger Vaccination Programme is now considered one of the most successful models in the country and is being developed in close partnership with the National Trust, National Farmers Union (NFU), Derbyshire’s Badger Group and the Country Land and Business Association (CLA).

The Wildlife Trusts and the badger cull

The Wildlife Trusts are firmly opposed to the badger cull. We are sympathetic to farmers whose cattle are affected by the devastating disease Bovine Tuberculosis (bTB) but we urge the Government to consider the scientific evidence which indicates that a cull will not reduce bovine TB in cattle. We believe that the focus for eliminating the disease should be on cattle and their movements across the country. A vaccine for cattle remains a top priority.

There are 47 individual Wildlife Trusts covering the whole of the UK.  All are working for an environment rich in wildlife for everyone.  We have more than 800,000 members including 150,000 members of our junior branch Wildlife Watch.  Our vision is to create A Living Landscape and secure Living Seas.  We manage around 2,300 nature reserves and every year we advise thousands of landowners and organisations on how to manage their land for wildlife. We also run marine conservation projects around the UK, collecting vital data on the state of our seas and celebrating our amazing marine wildlife.  Every year we work with thousands of schools and our nature reserves and visitor centres receive millions of visitors.  Each Wildlife Trust is working within its local communities to inspire people about the future of their area: their own Living Landscapes and Living Seas.